Nonviolence: Twenty-Five Lessons From the History of a Dangerous Idea by Mark Kurlansky 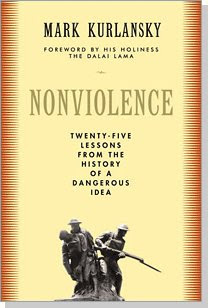 Mark Kurlansky will receive the prize for nonfiction and a $10,000 honorarium for his book Nonviolence: 25 Lessons from the History of a Dangerous Idea. Kurlansky discusses nonviolence as a distinct entity, a course of action, rather than a mere state of mind. It is a sweeping yet concise history that moves from ancient Hindu times to present-day conflicts raging in the Middle East and elsewhere. Exploring the revolutionary concept of nonviolence in an historical, social and political context, he presents twenty-five provocative lessons that can be used to effect change today.

Author Statement: “I’m thrilled to receive this award because there’s no subject closer to my heart. It’s a valuable opportunity to ask people to rethink history, and I still believe the world can be changed.” Mark Kurlansky

Judge Citation: “The smoothly elegant prose of Mark Kurlansky’s Nonviolence provides a cogent analysis of the vast sweep of the history of human conflict. Its thoughtful assertions and conclusions invite both contemplation and debate.” C. M. Mayo

Mark Kurlansky has also written Cod: A Biography of the Fish That Changed the World; Salt: A World History; 1968: The Year That Rocked the World; The Basque History of the World; and The Big Oyster: History on the Half Shell.

The October 14 ceremony will be held at The Schuster Center, Second & Main Streets, Dayton, Ohio. For further information about the prize and the award ceremony, please visit www.daytonliterarypeaceprize.org.
The full press release is here.