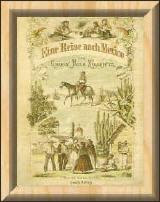 Just got my copy of the 1868 English translation of Countess Kollonitz's The Court of Mexico (Eine Reise nach Mexiko im Jahre 1864). It's a remarkable memoir; in my novel, I based much of the description of Maximilian's voyage from Europe to Mexico on her vivid descriptions (in the Spanish translation, Un viaje a Mexico en 1864). There's a bit about the countess on the Mexico Desconocido website. Later in life she had a brief and unhappy marriage to Felix Eloin, the Belgian mining engineer who had been Maximilian's chef du cabinet. She does not appear in my novel, however, as she departed Mexico just before the action began. More anon.
Posted by C.M. Mayo at 8:21 PM