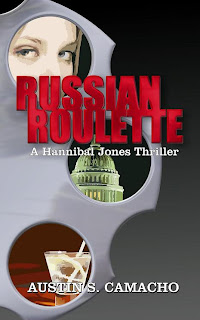 The guest-bloggers are back here at Madam Mayo. It's been a long while since the last guest-blog post (short story writer Dylan Landis on 5 Magnetic Spaces, back in August), and an even longer while back to July when poet and childrens book writer J.D. Smith offered his top 5 mariachi links. If you've been following this blog for more than two days at a stretch, you know the reason is I've been on tour with my new novel. Enough said. This Wednesday: novelist Christina Baker Kline. Today: my fellow Maryland Writers Association member, and intrepid volunteer for more than one area writers association (bless him!), Austin S. Camacho, whose latest novel in his Hannibal Jones mystery series is Russian Roulette.

Hannibal Jones, the Washington DC, African-American private detective is forced to take a case for Aleksandr, a Russian assassin. He must investigate Gana, the wealthy Algerian who has stolen Viktoriya, the woman Aleksandr loves. Evidence connects Gana to Russian mob money and the apparent suicide of Viktoriya’s father. More deaths follow, each one closer to Viktoriya. To save the Russian beauty, Hannibal must unravel a complex tangle of clues and survive a dramatic shootout on Roosevelt Island, side-by-side with his murderous client.

#2. For those of us who are not international businessmen, the Russia House Restaurant and Lounge provides an elegant meeting place for Washington's integrated social scene. The caviar selection is impressive and, as I point out in Russian Roulette, they have one of the largest vodka collections in the District.

#3. I found a more official introduction to Russian culture at the Embassy of the Russian Federation not far away on Wisconsin Ave. NW. While researching my novel I found this stately building more welcoming than expected.

#4. The Russian Bazaar is neither a place nor an event, but a student organization at George Washington University created to promote Russian culture and awareness of Russian traditions. The Russian Bazaar brings together people from all over the former Soviet Union and others who are eager to experience diversity.

#5. But the official home of Russian culture in the U.S. is The Russian Cultural Centre on Phelps Place NW. The center’s primary goal is to help develop and foster positive relations between the US and Russia in the 21st century. Their motto: That Our Two Nations Never Again Polarize.