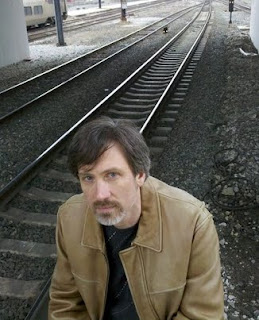 Guest-blogging this Wednesday is my fellow Maryland Writers Association member Eric D. Goodman, who has a new book out, Tracks: A Novel in Stories, set on a train traveling from Baltimore to Chicago. It has been garnering effusive praise, including from Madison Smartt Bell who calls it "a most cunningly crafted tale-- a perfect read for trains, planes, and automobiles... or even your armchair." Hop aboard at www.TracksNovel.com.

The train is a wonderful setting for a story. Trains are mysterious, exciting, and always in motion, the setting virtually unset. Strangers on a train are placed side by side to share a journey into the unknown, and in many cases, by the end of the line they are no longer strangers. Movies, novels, stories; adventures, comedies, mysteries—genres and themes as diverse as the passengers on a train. There are hundreds, but here are five train stories worth riding.

1. The Train
Those who appreciate art should appreciate this classic film starring Burt Lancaster, based on the true story about the looting of master paintings from the Musee du Jeu de Paume. A German officer steals a collection of French masterworks and loads them onto a train set for Germany. Labiche and the resistance vow to stop the train before it reaches the border.

2. Murder on the Orient Express
For the mystery lover, it doesn’t get much better than Agatha Christie’s Poirot mystery confined on a train. It was adapted to film more than once, the most successful version being the 1974 film starring Albert Finny, Sean Connery, Lauren Becall, and Anthony Perkins. But if you’re only now boarding this train, read the book before witnessing the movie.

3. The Iron Tracks
For a fine literary ride about a person’s quest for revenge, this is a novel to savor. The narrator, Siegelbaum, spends his life traveling by train through Austria to recover stolen pieces of Jewish culture. But when he reaches his underlying goal, it’s not all he imagined.

4. Silver Streak
Need a little comic relief? Look no further than this Gene Wilder – Richard Pryor comedy. Wilder’s character is a book editor who takes the train because he wants to be bored. That doesn’t work out as he gets involved with romance, multiple murders, and even a runaway train.

5. Strangers on a Train
You may have seen the movie by Alfred Hitchcock. But have you read the book by Patricia Highsmith? The master novelist of psychological thrillers and crime fiction (who also wrote The Talented Mr. Ripley) is best known for this “exchange murder” story … which inspired train movies like Throw Momma from the Train, Dead End, Once You Kiss a Stranger, and an episode of The Simpsons. But those are for another list.

---> For the complete archive of Madam Mayo Blog's guest-blog posts, click here.
Some recent guest-blogs include:
*Susan Coll on 5 Comic Novels
*Richard Jeffrey Newman on 5 Sites to Learn More About the Shahnameh
*Roberta Rich on 5 + 1 Books to Inform a 16th Century Historical Thriller
Posted by C.M. Mayo at 12:07 AM