Guest-blogging today is Andrew Dayton, co-author, with his wife Elahe, of The House That War Minister Built, a most unusual epic historical novel that is attracting showers of praise.

"In the crumbling days of the Qajar dynasty, Nargess's fate seems sealed as the upstart Reza Khan Shah sends his army to surround her husband's palace. She does not know that the greatest threat lies within! For the 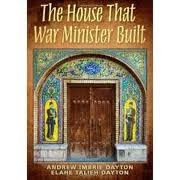 next three quarters of a century, Nargess and her family will endure the conﬂicts between a medieval religion and a modernizing population, between emerging nationalism and foreign manipulation. Contending with betrayal, arrogance and moral dissolution, they search for redemption, which only one of them will ﬁnd - on a deathbed in a strange land.
An epic saga with iconic characters, abundant cultural insights and surprising historical details, The House That War Minister Built covers the Iranian experience from the end of the Qajar dynasty in the 1920s, into the post 9/11 era."


Still married after thirty-one years, the last 8 of which involved writing their epic saga of Iran, they live on a mountaintop retreat on Maryland Heights, near Harpers Ferry. Both are scientists who picked up writing later in life. Andrew was educated at Princeton, then the University of Pennsylvania and Harvard. He has previously published short fiction in The Potomac Review and currently leads a research group in molecular virology on the NIH campus in Bethesda. Elahe was educated at the University of Tehran, then at the University of Pennsylvania and Harvard. You can find out more about them and the novel at their website www.aidayton.com.

Five Books to Get Your Head Inside Iran
By Andrew I. Dayton

If you want to feel, smell, taste and generally get your head inside Iran, here are a number of books that will get you there:

Garden of the Brave in War, Recollections of Iran, by Terrence O’Donnell is undoubtedly the most evocative. It paints a vivid tableau of the Iranian character: tolerant, generous, mirthful, capricious and devious – from beggars to voluptuaries a people far removed from the puritanical fanaticism portrayed in the West. In these memoirs you will encounter a range of characters, from servants whose intrusiveness derives from caring, to feudal princes who adopt peasant children to raise as their own. You will learn the truth to the old Persian saw that a missionary once complained of spending fifty years in Iran without a single convert. “Don’t worry,” an Iranian friend consoled him, “Mohammed didn’t get any either.”

In Blood and Oil, Memoirs of a Persian Prince by Manucher Farmanfarmaian, a scion of the country’s most famous family and one time Oil Minister under the Shah examines a considerable chunk of modern Persian history through the prism of oil politics, in which his family played a major role. Much of the information is surprising and counter intuitive. Did you know, for instance, that the hue and cry raised by the British over Iran’s nationalization of their oil company in the 1950s (leading to a CIA-sponsored coup) masked crocodile tears? Did you know that only a decade later President Kennedy’s well-intended populist policies first raised Ayatollah Khomeini to national prominence?

Speaking of the 1953 CIA coup, which toppled the democratically elected regime of Mossadegh, did you know that it was led by our man in Tehran, Kermit Roosevelt, grandson of Teddy? Find out more by reading Stephen Kinzer’s All The Shah’s Men, An American Coup and the Roots of Middle East Terror. Operation Ajax was the first time the United States Government toppled a Middle Eastern government. The resulting restoration of Mohammad Reza Shah to the Peacock throne allowed a tyranny that led to the Islamic Revolution in 1979 and much of the Islamic terrorism that plagues the world today.

On a lighter note, to savor the visual pleasures of Iran, browse through the splendid Persia, Bridge of Turquoise, a coffee table masterpiece featuring stunning photographs by Roloff Beny, and an interesting forward by Seyeed Nasr on Iranian culture and religion. This book is out of print, but worth tracking down for the photographs alone.

Finally, for insight into the tragic general failure of Islam (including Iranian Shiism) to keep up with the West, you can’t miss Bernard Lewis’s What Went Wrong? The Clash Between Islam and Modernity in the Middle East This renowned Princeton scholar examines the multitude of forces that led the once dominant Islam, for centuries the vanguard of world power and learning, to tumble into an abyss of backwardness. Not the least of their errors was one to which we may fall victim ourselves: failure to learn from those we disregard.

--> For the archive of Madam Mayo guest-blogs, click here.

Recent guest-blogs include Jim Johnston on Mexico City; Gerry Hadden on some spectacularly remote places; and Richard Jeffrey Newman on sites to learn more about the Shahnameh.
Posted by C.M. Mayo at 12:08 AM