Podcasting Q & A with Literary Disco (Tod Goldberg in Particular) 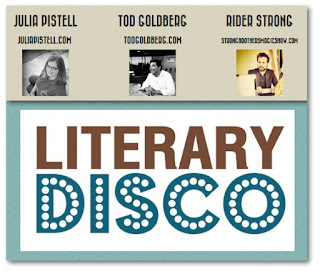 As those of you who follow this blog know, I'm not only hosting two podcast series (Marfa Mondays and Conversations with Other Writers), but I'm writing an iBook, Podcasting for Writers & Other Creative Entrepreneurs, which is based on my Writer's Center workshop and will be available later this summer from Dancing Chiva on iTunes. So naturally, I'm interested to know-- and I imagine you might be, too--what other podcasters have to say about podcasting.

Today's Podcasting Q & A is the third in a series (the first was with writer and artist Ricë Freeman-Zachery, host of Notes from the Voodoo Lounge; the second, with Chris Gondek, host of The Invisible Hand and founder of Heron and Crane, podcaster for several university presses).

So: let's shimmy over to Literary Disco, which is hosted by Tod Goldberg, Julia Pistell, and Rider Strong.


Literary Disco (Tod Golderg in particular) gives the A's to my Q's:


C.M. Mayo: What inspired you to start your podcast?
Literary Disco: Well, we really like talking to each other about books and writing and, at the same time, we were frustrated by the lack of literary podcasts that didn't descend into self importance. The nice thing about the Internet is that if you're into something, there are about 20 million people out there equally into that same thing and it occurred to us that there might just be a few people who were interested in having a good time while talking about literature. We take books seriously, but we don't take ourselves that seriously in the process.

C.M. Mayo: How do you select the guests / topics for your show?
Literary Disco: We pick books we're interested in talking about, which is an entirely subjective affair. We'll look at old books and new books and books we think will be good and books we think will be bad. Truthfully, some of our best shows have been about books we hated -- i.e., Sweet Valley High -- because it's a lot of fun to discuss the mortal pain one suffers while reading something that you hate. By and large, we're driven to talk about books that we want to share with the world for some specific purpose -- it doesn't need to be a hot book or a bestseller or even something current -- but it does need to get our collective interest in some way.

C.M. Mayo: What's the best part of doing the podcasts?
Literary Disco: For us, it's the chance to talk about something we're each very passionate about. But, also, it's just an awful lot of fun for the three of us to get to spend an hour every week or two in each other's online company giggling and talking about stuff. We're basically recording the conversations we'd have with or without an audience.

C.M. Mayo: What keeps you podcasting?
Literary Disco: The fame, the money, the parties with Jay-Z.

C.M. Mayo: (C'est vrai, it's intense.) What has surprised / frustrated / enchanted / bamboozled / amazed you about podcasting?
Literary Disco: The quick and effusive response. We just assumed no one would ever listen and yet just a few days after posting our first episode, we were getting flooded with downloads and emails and strange people demanding we read their books about aquatic alien overlords. Once you get the aquatic alien overlord people, well, you've made it. Oh, and that we all hate the sound of our voices.

C.M. Mayo: (I get the YA vampires of Gotham, not that I could tell you why. Maybe it's a west coast vs east coast kind of thing, you think?) What equipment do you use to record and what software to edit?
Literary Disco: Rider and Julia use GarageBand and Tod uses Audacity. We each have different mics, but what we've found is that good mics make a huge difference. Our first shows were recorded using crappy mics and it was hard to listen to them sometimes without feeling very frustrated. So don't scrimp on mics.

C.M. Mayo: Any tips on improving sound quality?
Literary Disco: Not screaming helps. Keeping the mic a consistent distance away doesn't hurt. Recording in a sound proof chamber buried beneath the ground would be great.

C.M. Mayo: (You mean not screaming like this?) Um, any tips on promoting podcasts?
Literary Disco: We've subsisted on word of mouth and social media mostly and it helps that each of us had a platform of some kind previous to the show -- Rider is an actor and writer, Julia is part of a very popular improv troupe in addition to be an essayist and commentator on NPR, and Tod is an author and book critic -- so we each have brought a portion of our audience to the fore. We've also thought about starting a rumor about one of us getting into a fight with Drake at a bar or maybe that one of us is really a Kardashian, but thus far we've mostly been content to talk about books we think people will be interested in hearing us talk about and not worrying too much about hit counts. We're making the show for an audience we hope exists out there and thus we're ever hopeful they'll find us, either organically or through word of mouth or through a condition of their parole.

C.M. Mayo: Any other tips for podcasters?
Literary Disco: Try not to be too terribly drunk when recording.

C.M. Mayo:  (Helps not to hit the mic with your forehead.) What podcasts do you enjoy listening to?
Literary Disco: Other People, WTF, This American Life, Rich Eisen, Adam Carolla, The Nerdist and about a billion others.

C.M. Mayo: Do you have tips for podcast listeners?
Literary Disco: Try to wear pants when listening to the show. Really. It's strange that you don't.

C.M. Mayo: What kind of feedback do you get from your listeners, and do you encourage it?
Literary Disco: There's the aforementioned "please read my novel about our aquatic alien overlords" emails, which are always somewhat frightening, because, you know, we live near a body of water...but, generally, the feedback we get is filled with suggestions of books people would like us to read, or comments about how listening to the show is like having three friends sitting in the back seat of their car talking about funny stuff, or it's people correcting us on things we've said on the show, or it's people who want us to know how they felt about a particular book we read or it's people who can't believe we hold X opinion about Y topic. The preponderance of comments we get, however, tend to just thank us for doing the show and providing a little bit of entertainment for them on their lunch break. That's always the best, really, knowing people save us for their lunch breaks. That's sacred time right there.

C.M. Mayo: How do you see the future of podcasting per se / your podcasts?

Literary Disco: We're hoping that podcasts will eventually involve jet packs or flying cars, but we feel that way about the future of most things. Our podcasts will continue to focus on books and culture and will also continue to have guests coming on to talk about their favorite new books. And there's a good chance we'll eventually have a listener or two come on as a guest, too, since it would be fun to do that. We're also pretty sure that in the future podcasts will be in 3D and will also have the properties of an everlasting gobstopper. And by "pretty sure" we mean: god, we hope so.

--> Listen in to Literary Disco at www.literarydisco.com