Captured: The Forgotten Men of Guam by Roger Mansell (my dad) 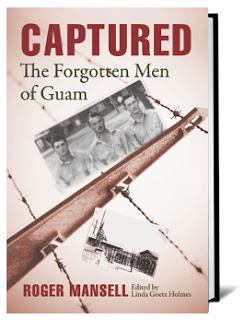 Just before he passed away in 2010, my dad, Roger Mansell, left the advanced draft of his book, Captured: The Forgotten Men of Guam, to be edited by his colleague, Linda Goetz Holmes, the author of Guests of the Emperor: The Secret History of Japan's Mukden POW Camp, among other titles. I am thrilled and delighted to say that Captured has been published this month by Naval Institute Press.

Prior to the outbreak of the Pacific War, Guam was a paradise for U.S. military and civilian employees stationed on the island. Shortly after the attack on Pearl Harbor, however, the Japanese invaded the tiny island, captured the Americans, and shipped them to Japan. Drawing on interviews with survivors, diaries, and archival records, Roger Mansell documents the mostly unknown story of these American POWs. The men endured horrific hardships, many of which are chronicled in this book for the first time. Also included are moving stories of their liberation, transportation home, and the aftermath of their ordeal.

“In the days of shock and horror that followed Japan's attack on Pearl Harbor, another monumental event, occurring almost simultaneously, was largely overlooked: Japan's bloody seizure of the strategically critical island of Guam. For the American troops, civilians and native people captured in the invasion, so began an epic ordeal. The Americans were shipped off to be slaves for the Japanese, while the natives remained behind to endure four years of brutalities under their captors. Roger Mansell, the pre-eminent historian of Pacific POWs, devoted the last years of his life to unearthing and telling this forgotten story, and after his death, the work was completed by his colleague, the esteemed POW author Linda Goetz Holmes. Chronicling a lost chapter of World War II, Captured promises to be an authoritative, fastidiously researched and compelling read.”
—Laura Hillenbrand, author of Unbroken: A World War II Story of Survival, Resilience and Redemption and Seabiscuit: An American Legend

“Roger Mansell worked tirelessly to research and document the stories of American POWs in the Pacific during World War II. His efforts give us a better understanding of the great service and sacrifice of these heroes. The stories he tells are a tribute to the warriors who defend us.”
—Oliver North

“Roger Mansell’s Captured is a beautifully written, richly researched account of the fall of Guam and a searing reminder of the horrific ordeal suffered by American prisoners of war at the hands of the Japanese.”
—John A. Glusman, author of Conduct Under Fire: Four American Doctors and their Fight for Life as Prisoners of the Japanese, 1941-1945


>Read more about the book and my dad's research legacy at www.rogermansell.com
>Pick up your copy of Captured: The Forgotten Men on Guam from Naval Institute Press and/or amazon.com
Posted by C.M. Mayo at 11:42 PM