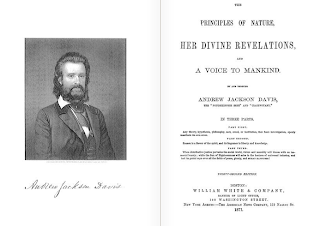 One of the many unlikely personalities featured in my latest book, Metaphysical Odyssey into the Mexican Revolution: Francisco I. Madero and His Secret Book, Spiritist Manual, is the so-called "Seer of Poughkeepsie," Andrew Jackson Davis, the "John the Baptist" of Spiritualism-- from whence came Spiritism.

(For Mexicans and anyone else wondering how to pronounce Poughkeepsie: pa-kip-si.)


Born in 1826 to working-class parents, Davis received boyhood training in tailoring from a Mesmerist who recognized his psychic talents. Soon Davis was well-known in the region for his clairaudience (psychic hearing) and clairvoyance (psychic sight), which he used for making medical diagnoses. One day in 1844, he claimed he fell into a trance and woke to find himself in the Catskill Mountains, some 65 kilometers northwest of Poughkeepsie, where he conversed with the spirits the Greco-Roman physician and philosopher Galen and the Swedish mystic Emanuel Swedenborg, who had died more than 70 years before. Subsequently, over a period of little more than a year, by entering a trance and allegedly channeling the words from spirits, Davis wrote a book. Published in 1847 when he was twenty one years old, his nearly 800-page opus, The Principles of Nature, Her Divine Revelations and a Voice to Mankind, foresaw the explosion of Spiritualism in the following year. The famous quote:

"It is a truth that spirits commune with one another while one is in the body and the other in the higher spheres. . . and this truth will ere long present itself in the form of a living demonstration. And the world will hail with delight the ushering-in of that era when the interiors of men will be opened, and the spiritual communion will be established such as is now being enjoyed by the inhabitants of Mars, Jupiter, and Saturn."

Davis’ Principles of Nature was a best-seller of its day—according to historian Mitch Horowitz, it sold nearly a thousand copies in its first week. For many readers the “proof of the pudding” that this was genuine communication from beyond the veil was that its author was not only so young but unschooled. Davis himself claimed he’d read almost nothing in his entire life. A professor of Hebrew at New York University, one George Bush, assured the New York Tribune that he had heard the entranced Davis quote Hebrew correctly and “display a knowledge of geology which would have been astonishing in a person of his age, even if he had devoted years to the study.”

It did not go unremarked, and Davis readily acknowledged, that his Principles of Nature echoed much that was in Swedenborg’s works. And here we must dig a little further and examine one more root of roots: Swedenborgianism, which had arrived on American shores in the late eighteenth-century, when an Englishman brought Swedenborg’s books and their stunning revelations to Philadelphia.

Mitch Horowitz, author of Occult America, a book I found invaluable for my researches, notes this on his blog over at Huffington Post:


"One of the most quietly monumental figures of the nineteenth-century was the American trance medium Andrew Jackson Davis (1826-1910), known (sometimes jokingly) in the press as the "Poughkeepsie Seer" for his Hudson Valley, New York, home.

Davis coined the term "Law of Attraction," though in a subtler sense from how it is used today. More significantly, the New Yorker's trance-based dictations, which he folded into several massive books starting in 1847, united the progressive and mystical impulses of the era. .. READ MORE

Horowitz also posted a bit about this beautifully done 20 minute documentary directed by Julia Bailey Johnson and other Vassar College students, "The Seer of Poughkeepsie," a poetic take on past and present Poughkeepsie, and which features an interview with Mitch Horowitz. Well worth watching.

>More blog posts about Metaphysical Odyssey into the Mexican Revolution
Posted by C.M. Mayo at 1:44 AM