At the FIL or, the Mexican Megabookmashup

Back on December 2, I hopped over from Mexico City to Guadalajara for the megabookmashup otherwise known as the Feria Internacional del Libro or FIL. It is so big-- aisle after aisle after aisle after towering aisle, all aflutter with so many book presentations, the aisles and escalators swarming, and auditoriums and meeting rooms cram-packed with readers and editors and marketers and journalists and writers ranging from the internationally famous to shall we say, locally intense (yes, some guy wanted to "share" his poetry), that, well, whew!

> Read Mexican poet Francisco Hinojosa's reflections on the FIL, what he calls, among other things, "the Pantitlán metro stop at rush hour."

Never mind if you can follow the Spanish or not, grok the scene with this official video from the FIL website:


When anyone whinges about how "no one" reads anymore, obviously, they have yet to set foot in the FIL!

But as for me, what I like to do is sit by myself at my desk and write-- or else ramble around whilst conjuring poetic thoughts in the desert. You know, the shamanic Orphic Journey thing. (My writing assistants model the process.) Although I relish meeting other writers and readers, I cannot endure the windowless crazy-buzz of FIL for more than a couple of hours every other year. Which is, more or less, my track record. 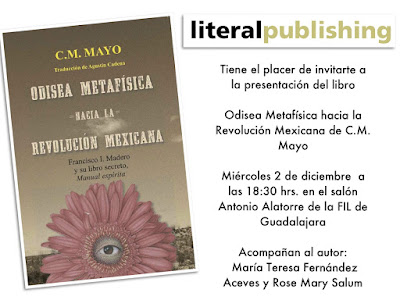 This was my third presentation at the FIL, the two previous presentations being for my novel, The Last Prince of the Mexican Empire in 2009 and, in 2010, for its translation by Agustin Cadena as El último príncipe del Imperio Mexicano, plus the anthology Best of Contemporary Mexican Fiction (my contribution to that was the translation of a short story by Alvaro Enrigue). I first attended the FIL waaaaaaay back in 1998, when the American Literary Translations Association held their annual meeting there and, providentially, I brought along the first issue of Tameme.

So here I am on this past December 2 with Dr María Teresa Fernández Aceves, left (reading from her talk) and my editor, Rose Mary Salum, founding editor of Literal Publishing, right. 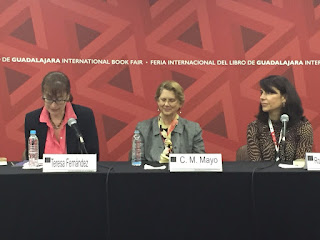 Fernández Aceves is the author of Mujeres en el cambio social en el siglo XX mexicano (2014). The translation of that could be Women and Social Change in 20th Century Mexico, and here's hoping that comes out soon. See my blog post about one of the many biographies in her book: of the Spanish feminist and Spiritist Belén de Sarraga, whose conferences during Madero's administration scandalized Mexican conservative society.

I suppose you could call me an "independent scholar"; I wrote Metaphysical Odyssey into the Mexican Revolution firstly as a translator, and secondly as a literary essayist and novelist, and I consider it both a work of scholarship and of creative nonfiction. In other words, I am not an academic historian, so it is an honor indeed to have such a distinguished Mexican historian present my work in such a forum. I owe my meeting Maria Teresa Fernández Aceves a few years ago to my amiga the historian and biographer Mílada Bazant, who organized a brilliant conference on biography at the Colegio Mexiquense and edited a volume of essays, including one of mine, about fiction and truth and Agustín de Iturbide y Green. (And more in this post.)

Over at the Literal Publishing stand, who of all people showed up in the middle of my radio interview with this kind gentleman from the University of Guadalajara... 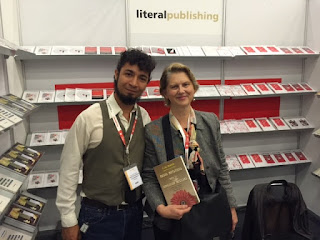 ... but Raymond Caballero, ex-mayor of El Paso, Texas and the author of the excellent new biography of Mexican revolutionary General Pascual Orozco, and whom I happened to have to just interviewed for my Marfa Mondays Podcasting Project! Well! How about that! Here we are! 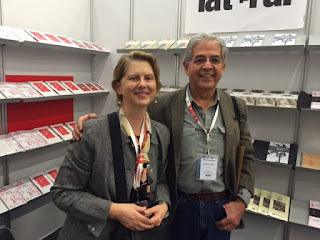 Ray sat down and chimed right in -- so that University of Guadalajara radio show got two biographers on two biographies out of the Mexican Revolution, both Madero's and Orozco's! I hear the interview aired yesterday, Sunday, and I hope they will send a link to the podcast....

>Listen in anytime to my "Marfa Mondays" interview with Raymond Caballero on his new book, Lynching Pascual Orozco: Mexican Revolutionary Hero and Paradox.

I hope Caballero found a Spanish language publisher in the FIL for his vital contribution to Mexican and Far West Texas history; certainly, this book should be available in Spanish-- like, yesterday. 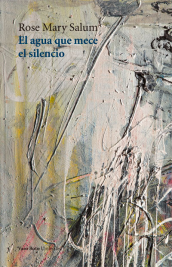 Also new at the FIL: Here is Rose Mary Salum's new book of short stories set in Lebanon, El agua que mece el silencio, just out from Vaso Roto. And I am both delighted and honored to mention that I am about half way through translating this work into English as The Water That Rocks the Silence.

> The title story was published earlier this year in English, with a slightly different title, in Origins.

When I see friends' books I always feel like a little band of literary leprechauns is waving "hi"! (I know that sounds like a strange thing to say, but to me, books really do have a life of their own.)

Here, also at the Vaso Roto stand, is a stack of my ex-Coyoacán neighbor, Anne Marie O'Connor's splendid The Lady in Gold: The Extraordinary Tale of Gustav Klimt's Masterpiece, Portrait of Adele Bloch-Bauer, translated into Spanish as La dama de oro. I will take the teeniest crumb of credit for at least wishing this book into Spanish, for in this book's presentation in Mexico City back in 2012, I did say that:


"My one and only criticism of Anne Marie O'Connor's The Lady in Gold, which is really more an expression of admiration and enthusiasm, is that it is not already available in Spanish." 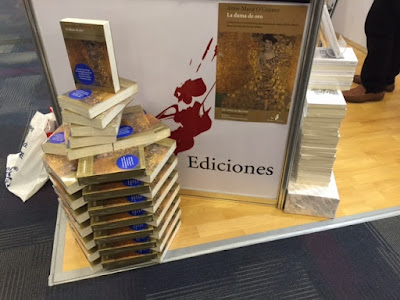 P.S. There is often official FIL hotel-expense support for literary translators who are attending. To get the latest news flashes and be sure to meet up with other translators at the FIL, I can warmly recommend the American Literary Translators Association.

Highlights From My Landing on Planet Austin

A Conversation with Sergio Troncoso