Today, November 20, is the anniversary of Mexico's 1910 Revolution, a national holiday in Mexico, so this post is especially apt.

This past week I had the delightful privilege of presenting my work about the leader of that revolution in Ciudad Juárez's Museo de la Revolución en la Frontera (Museum of the Revolution on the Border).

From El Paso, Texas, snap your fingers and you're in Ciudad Juárez. Yes, alas, Ciudad Juárez is notorious for its troubles but, with another snap of the fingers, I can mention three fabulous things about this historic Mexican border city:

This video gives an overview of this impressive museum (in Spanish):


2. La Nueva Central
¡Café con leche! ¡Huevos con machaca! I could eat breakfast here every day for the rest of my life and I am not kidding! Check out the raves about this historic café, like a journey back to 1958, on TripAdvisor.

Here's a screenshot from my video of historians Roy "Ben" Brown, John Eusebio Klingemann, having just finished breakfast, heading out to the conference... I was going to make a GIF from this video of us all laughing for some reason I cannot recall, but demonios, my GifGrabber app went wiggy.


3. The conference, "La Revolucion vista desde los extranjeros" (The Revolution as Seen by Foreigners) in the above-mentioned museum 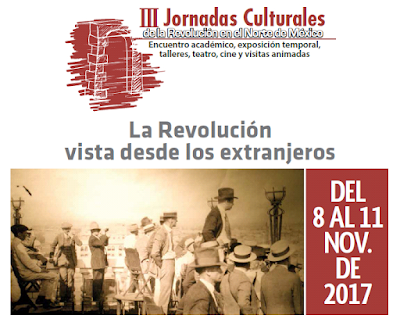 It's over, y'all missed it, but there should be another conference next year, and isn't the photo fun? It shows businessmen on a rooftop in El Paso watching the Battle of Ciudad Juárez-- the two cities are that close, separated only by the Rio Grande (or the Río Bravo, as the Mexicans call it).

Thanks to Dr. Roy "Ben" Brown, Dr José Francisco Lara, Jorge Carrera Robles of INAH, and Liliana Fuentes, Director of this beautiful museum, and Ana Hilda Vera, who makes everything happen, I was greatly honored to be invited to present Odisea metafísica hacia la Revolución mexicana, the Spanish translation by Agustín Cadena of my book, Metaphysical Odyssey into the Mexican Revolution: Francisco I. Madero and His Secret Book, Spiritist Manual.

Commenting on my book about Madero's book was noted historian of the Mexican Revolution and the Escobarista Rebellion, Dr. Georgette José Valenzuela, of the UNAM (Mexico's National University in Mexico City).

My book has been out since 2014, so there are several talks and other information up on my website, notably:


> Transcript of my presentation at the 2016 Center for Big Bend Studies: "The Secret Book by Francisco I. Madero, Leader of Mexico's 1910 Revolution" (For scholars this is the go-to PDF.)

> Why Translate? The Case of the President of Mexico's Secret Book
My talk for a panel on politics and translation at the American Literary Translators Association conference

> My review of Whitey Strieber and Jeffrey K. Kripal's Super Natural, which is also an essay about my own encounter with a mystical text, that is, Madero's Manual espírita

> Gigazoodles more at "Resources for researchers"


Dr John Eusebio Klingemann, who chairs the Department of History at Angelo State University in San Angelo, Texas, presented his research into the archives of the US consuls in Chihuahua 1913-1914. This was the tumultuous period after the fall of Madero's government, the revolution against the usuper government of Victoriano Huerta-- and as with the 1910 revolution, fighting in the north of Mexico, and especially around the border, was leading and vital.

Commenting on Klingemann's work was UTEP's Samuel Brunk, expert on the Mexican Revolution, author of a noted biography of Emiliano Zapata, and a specialist on borderlands environmental history.

Pictured left, below, is Dr. Georgette José Valenzuela as she delivers her paper, "La Revolucion mexicana comenzó en 1910, pero ¿cuándo dice la historiografía al respecto que terminó? (The Mexican Revolution Began in 1910, but What Does the Historiography Tell Us About When It Ended?) It was a fascinating and superb work covering the many controversies and standing questions. 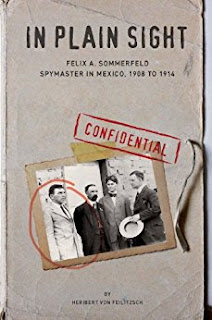 (And for anyone wondering, hmmm, what's going to happen now that the Tweeter-in-Chief has seriously pissed off the Mexicans for the next two decades, a snap of the finger's worth of reflection upon von Feilitzsch's In Plain Sight: Felix Sommerfeld, Spymaster in Mexico should provide more than a few... shall we say.... unsettling possibilities.)

For my money, the Mexican Revolution, so crowded with personalities and events, is one of the richest and most complex events on Planet Earth, a veritable palace of opportunity for any historian or novelist. And it looks like I will be writing about it for awhile... as those of you follow this blog know, although I happened to have written this book about Madero and his secret book, I am not an academic historian but a literary essayist, novelist, and poet. My work in-progress, modeled on my previous work on Baja California, is a book-length literary essay about Far West Texas, which of course includes a significant stretch of the US-Mexico border... My next blog post will be about the work I presented the following day at the Center for Big Bend Studies, from my book on Far West Texas, not about the Mexican Revolution but a most unusual officer who served with the Tenth Cavalry in the Indian Wars. More next Monday.

Dispatch from the Sister Republic
or,
Papelito Habla
(This is a link to the page about my longform essay on the Mexican
literary landscape and the power of the book. The page
offers several links to posts on this blog about Mexican literary history.)

Guiseppi Garibaldi's A Toast to Rebellion


Reading Mexico:
Recommendations for a Book Club
of Extra-Curious & Adventurous English-Language Readers
Posted by C.M. Mayo at 12:01 AM