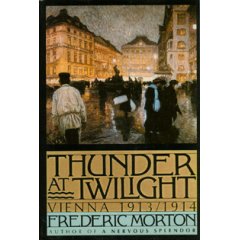 Just finished Frederic Morton's splendidly researched and beautifully written Thunder at Twilight: Vienna 1913-1914. (It was of special interest me as I'm finishing my novel, which includes a character who was the Kaiser Franz Joseph's younger brother: Maximilian, the Emperor of Mexico.) Thunder at Twilight is a braiding of several narratives, among them, Freud's struggles with Jung; Trotsky and Stalin's stays in the city, and above all, the prelude to World War I. Especially well-done is the story of the assassination of Archduke Franz Ferdinand -- whom Morton aptly calls "the volcanic apostle of pacificism"-- in Sarajevo. If I could give this book ten stars, I'd give it eleven.
Posted by C.M. Mayo at 12:16 PM