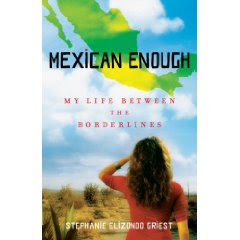 Both bad news and good news today. The bad: Olsson's bookstores, long a standard of quality in the Washington DC area independent bookstore scene, have closed (filed for bankruptcy). Today's guest-blog post, by Stephanie Elizondo Griest, was apropos of her reading at the Dupont Circle DC Olsson's scheduled, alas, for tomorrow night. Well, on to the good--- indeed, very good: Presse Bookstore has just opened in Georgetown, DC on (how apt!) Book Hill, which I'll be blogging about later this week. And Stephanie Elizondo Griest's new book is out, available from fine bookstores throughout the U.S. She's the author of a rollicking memoir, Around the Bloc: My Life in Moscow, Beijing and Havana, and the very popular (I've given several as gifts) 100 Places Every Woman Should Go. Read all about Mexican Enough: My Life Between the Borderlines on her website at www.MexicanEnough.com. Over to you, Stephanie!

On New Year’s Eve of 2005, I ventured to Mexico with two intentions: to learn Spanish and to gain a deeper sense of my cultural heritage. History had other plans, and I soon found myself chronicling a social movement that shook the nation to its core. Here are five glimpses into the Mexican underworld, which are documented in my new memoir Mexican Enough: My Life Between the Borderlines.

1. Gays & Lesbians
I spent the first leg of my journey living with a pack of young, gay male artists in Querétaro. Our house was the epicenter of their community: gay men flocked in at all hours of the day and night. Since the majority lived with their parents (most of whom didn’t know they were gay), our house was their oasis. Upon crossing our threshold, they’d beeline for the bathroom, where they’d dip into the communal jar of gel and spike their hair into tufts. Then they’d blast Dead Can Dance, flip through fashion magazines, hold their boyfriend’s hand, tell stories. I loved it: not only were they entertaining, they taught me a far more colorful vocabulary than I was learning at the language school down the street!

The gay rights movement is actually making strides in Mexico, especially in the capital. In 2006, Mexico City passed a same-sex civil union law that gave gay couples the right to inherit pensions and property, join health and life insurance policies, and make medical decisions for each other. The border state of Coahuila has since passed similar legislation. But even so, Mexico is a fervently Catholic nation led by clergy who aggressively campaign against alternative lifestyles. It is also infested with “macho” men who torment homosexuals. Nearly 300 Mexicans were murdered because of their sexual orientation between 1995-2003. In fact, the foremost gay activist in Querétaro – a 28-year-old clinical psychologist named Octavio Rubio Acuña – was assassinated in his condom shop soon after I left. I investigated his slaying, and nearly everyone I interviewed believed that the local police were responsible.

2. Families of the Undocumented
One in ten Mexicans currently lives in the United States, and hundreds of thousands more migrate every year. The bulk do so by crossing the 2,000-mile border with a human smuggler, and at least 500 perish annually along the way. With one phone call, their families back in Mexico learn that they will never return. That they vanished in the desert. That they got arrested, no one knows why. So the United States seems like a black hole to these families. An abyss that sucks people away. They don't know where their loved ones work, what they do, who they live with, who they cross with. They don't know the name of their new hometown, which state it is in, or even what side of the country. They just pocket the paychecks they wire home every 15 days and wait for their return. Some don’t. Tightened security at the U.S. border has made it much more difficult, dangerous, and costly to cross. Rather than being deterred from entering, migrants who’ve already made it are staying for longer periods of time (if not permanently) to amortize the expense. This is the terrible irony of immigration: people go in order to help their families, but sometimes end up abandoning them.

3. The rural poor
When NAFTA was passed in 1994, Mexico’s then-President Carlos Salinas declared that it would “create jobs instead of migrants.” Instead, it has further impoverished the rural poor. I met countless farmers who were able to support their families just fine – until NAFTA. The price of staples like corn and coffee have been driven so low, it now costs farmers more to grow than what they would earn selling. Many have become subsistence farmers, tending only what their family can eat and allowing the rest to go fallow. According to a 2003 Carnegie Endowment report, some 1.3 million Mexican farmers were forced to quit their fields within the first decade of NAFTA alone. The bulk migrated to the United States. So in essence, U.S. economic policies are actually a major reason why so many Mexicans migrate in the first place.

4. Strikers
Mexicans seem to have as many words for “strike” as Eskimos do for “snow.” Perhaps the most extreme form is the plantón, when they gather in the town plaza, unfurl their bedrolls, and refuse to budge until their demands are met (or they are physically removed). And that can take forever. I interviewed one group who held a plantón in downtown Oaxaca for four years. They bathed there, slept there, grilled tortillas and tamales. Women even gave birth there. I once joined some plantón strikers on a seven-mile protest march. They had been sleeping upon cardboard for nearly 40 nights and were wearing flipflops and carrying multiple children in the pouring rain. They were also, on average, five inches shorter than me. Yet they marched twice as fast and far. I couldn’t keep up with them, and had to bail out halfway through from exhaustion. Mexicans are tough!

5. Prisoners
In Mexican prisons, inmates are often allowed to leave their cells. This was a bit of a shock for me: When I visited one in Oaxaca, a large group of inmates bum-rushed me, waving handicrafts in the air. None wore uniforms or handcuffs or even similar haircuts, so I initially thought they were vendors who somehow smuggled their goods inside. When I discovered they were inmates, every prison movie I’d ever seen flooded my brain. But Mexican prisons differ starkly from prisons in the United States. They only give their inmates enough food so they don’t starve and enough clothes so they aren’t naked. If they want to survive, they have to hustle.

The prison itself actually reminded me of a Chinese student dorm. Inmates sleep in bunk beds, six or eight to a room, and they can choose their cellmates. There seems to be few regulations about personal possessions: I saw crockpots, hot plates, cutlery, kitchen knives. I couldn’t help but contemplate how many different ways they could kill the guards, each other, or themselves – but apparently they don’t. They can also receive visitors inside their cells for three to four-hour intervals a day, and married couples can request private rooms for conjugal visits one weekend a month. Three of my cousins are currently imprisoned in the United States, and as far as I could tell, their Mexican counterparts enjoy a far more humane experience!

Mexico’s judicial system is another story, however. Human Rights Watch estimates that more than 40 percent of Mexico’s prison population hasn’t even been convicted of a crime. Torture-induced confessions are employed to solve about one-third of cases, and defendants are rarely granted much access to the judges who decide their fate. The justice system also tends to persecute the wrong people. In Mexico City, for instance, more than half of the 22,000 prisoners have committed crimes as heinous as stealing a loaf of bread. Politicians and businessmen who pilfer millions, meanwhile, either slip by unpunished or bribe their way to freedom. As the martyred Salvadoran Archbishop Oscar Romero once said: “The law is like a serpent. It bites the feet which have no shoes on.”

--->For the archive of Madam Mayo guest-blog posts click here.
P.S. Related:
--->Q & A with Stephanie Elizondo Griest over on World Hum;
--->David Lida's 5 Secrets of Mexico City;
--->For the 19th century version of Mexican highway robbery, check out Alan Flukey's magnificent translation of the classic of Mexican literature, Manuel Payno's The Bandits from Rio Frio;
--->a review (from Wilson Quarterly) of Mary Jordan and Kevin Sullivan's The Prison Angel: Mother Antonia's Journey from Beverly Hills to a Life of Service in a Mexican Jail.
Posted by C.M. Mayo at 10:59 AM