Guest-Blogger Porter Shreve on 5 Favorite Novels of the '70s 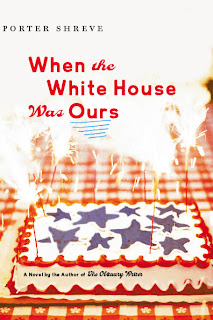 Today's guest-blogger is Porter Shreve, author of the novels The Obituary Writer, Drives Like a Dream and the recently-released When the White House Was Ours, which has been garnering some bodacious reviews, from the Washington Post ("[t]urn off the TV pundits, turn down the thermostat, and slip on a comfy cardigan") to the Los Angeles Times ("laugh out-loud scenes and wonderful passages"). Over to you, Porter!

My novel When the White House Was Ours is set in Washington, DC, in 1976 and narrated by a twelve year old kid who has a dawning awareness of what it means to live in the post-Nixon, pre-Reagan transitional decade that cluttered the world with mood rings, lava lamps, feathered hair, afros, leisure suits, platform shoes, KC and the Sunshine Band and Donna Summer. An outrageous, cartoonish decade on its surface the Seventies are easy to mock as self-absorbed, materialistic, insubstantial. There wasn’t much to celebrate, either: the economy was in the tank; the succession of presidents included a crook, a bumbler and an ineffectual moralist. The critic Howard Junker complained that “the perfect Seventies symbol was the pet rock, which just sat there doing nothing.” And Norman Mailer called the Seventies “a decade in which people put emphasis on the skin, on the surface, rather than on the root of things. Image became preeminent because nothing deeper was going on."

I beg to differ-– and not just because the Seventies made up a good part of my formative years. Transitional eras, moments of betweenness, those times of blending and uncertainty before and after the big battles, provide great material for writers. So when I sat down to research When the White House Was Ours I found a wealth of Seventies novels to drawn on. My list could be much longer, but here are five favorites:

The Lone Ranger and Tonto Fistfight in Heaven by Sherman Alexie.
Talk about betweenness. Alexie’s first book of prose wavers between a novel and a story collection, lyricism and scene-driven narrative, hilarity and bleakness, realism and myth, and is packed throughout with the kind of irony characteristic of a whole era: “During the sixties, my father was the perfect hippie, since all the hippies were trying to be Indians.”

Flower Children by Maxine Swann.
I love a truly integrated story cycle or novel in stories (three of my recommended “‘70s novels” fit the bill.) And one of the finest recent examples of the form is this lush kaleidoscope about the legacy of Aquarius. Without strain or judgment, Swann takes on the perspectives of the kids of back-to-the-land hippies, showing the wonder and perplexity that comes with total freedom.

The Ice Storm by Rick Moody.
If the Seventies was a transitional decade, it was also a rather short one. Many social historians mark 1973 as the end of the Sixties, but for one family in the wealthy Connecticut suburbs the Summer of Love has just arrived. Moody makes a masterful metaphor of the ice storm and even finds meaning in seemingly ephemeral period detail, such as GI Joe, the Fantastic Four, and key parties.

The Women of Brewster Place by Gloria Naylor.
A social novel-in-stories, Naylor dramatizes the crisis of ‘70s era public housing through the perspectives of seven women living in the New York City projects. Beginning with the iconic epigraph from Langston Hughes-– “What happens to a dream deferred?”-– Naylor shows the burden of dispossession and broken promises with a rich weave of memorable voices.

Rabbit is Rich by John Updike.
Like all great books, Updike’s third Harry Angstrom novel is both timeless and quintessentially of its time. Here are two lines from the first page that could just as well have appeared in this morning’s paper: “The people out there are getting frantic, they know the great American ride is ending... People are going wild, their dollars are going rotten...”