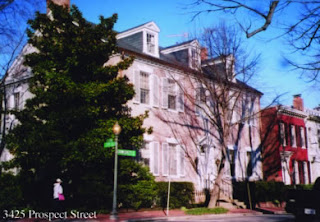 May he rest in peace: Former senator Claiborne Pell has died. (Read his obituary in the Washington Post here.) He was a major figure in the U.S. Senate, foreign relations, Georgetown society and, unlikely as it sounds, a supporter of remote viewing.

I never had the priviledge of meeting him, but he's been been on my mind occasionally because of his house on Prospect Street in Georgetown, DC. For a year back in 1979-1980, I lived in the Georgetown University's Loyola dormitory across from his garden gate; so I walked by his house almost every day. All the students knew that was Senator Pell's house--- he was famous then. Some twenty years later, when I began researching my novel, The Last Prince of the Mexican Empire, based on the true story of Agustin de Iturbide Green (1863-1925), the grandson of Mexico's Emperor Iturbide, when I delved into various archives, I found the address of his wife's the family home, an historic Federal-style mansion known then as "Quality Hill." So I took a walk up Prospect Street to have a look. Imagine my astonishment to find that it was none other than the house I'd lived next to for a year--- Senator Pell's house!

"Quality Hill" was owned by the Kearney family for much of the 19th century. In the early 20th century, Louise Kearney de Iturbide inherited it and, after a court battle against her siblings, which she won, she immediately sold it. Some histories claim that she and her husband lived there for many years, however, the records show that soon after their marriage in 1915, they went to live in an apartment on P Street near Dupont Circle.

As for Senator Pell, he sold his house a few years ago for a not insubstantial sum, as noted in Washington Life. More anon.
Posted by C.M. Mayo at 9:05 PM