Cinco de Mayo: It's Pub Date for The Last Prince of the Mexican Empire by C.M. Mayo (Unbridled Books) 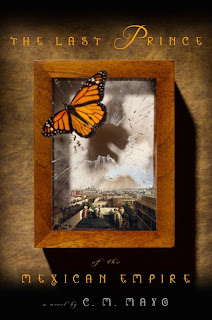 Who knew that Mexico once had a half-American prince? Or that this little boy’s future was hotly debated not just in Mexico but in Washington D.C. and in every court in Europe? Set in the mid-19th century when Maximilian von Habsburg was Emperor of Mexico, The Last Prince of the Mexican Empire is based on the true and never before completely told story about a half-American, half-Mexican boy who, as in a fairytale, became a prince and then a pawn in the struggle-to-the-death over Mexico's destiny. Read all about it here and buy it now at your local independent bookstore, Barnes & Noble, amazon.com, Powell's, basically, you-name-it, here.

Epic in scope, Mayo's impressively researched novel set in mid-19th century Mexico City mines the true story of the short turbulent reign of the archduke of Austria, Maximilian von Hapsburg, who was made emperor of Mexico in 1864. Childless and desperate for an heir, the emperor makes substantial monetary promises to the parents of a young boy named Agustin. With much trepidation, they agree to give over the boy, who becomes a pawn in a custody battle that begins when Maximilian adopts the two-year-old Agustin with the hopes of having him inherit the throne. Agustin's American mother, Madame de Iturbide (née Alice Green), soon becomes dissatisfied with the arrangement and pleads with Maximilian to return her son. Maximilian has Alice deported, which sets off an international brawl. Maximilian finally concedes as Mexico devolves “into bankruptcy and lawlessness” and Maximilian's wife, Carlota, becomes increasingly “unmoored.” Lengthy, expository, meandering and grandiose, Mayo's reanimation of a crucial period in Mexican history should satisfy history buffs and those in the mood for an engaging story brimming with majestic ambition.
Publisher's Weekly

...a ton of juicy history to savor. Mayo has an elegant style that weaves in and out of fact and fiction as she reaches into the minds of the major players and then deviates to introduce supporting characters (nearly all of them real as well)... After finishing this wonderful novel I have new respect for the trials suffered by our southern neighbor in the recent past and also a deep desire to learn more about so many of the names involved, not the least of which the little boy who almost became the future ruler of a nation.
Bookslut

Mayo resurrects a sad story from the footnotes of history and embroiders the few details known about it into a rich historical novel... Mayo comfortably blends fiction with fact while illuminating a dark corner of North American history.
Booklist

The Last Prince deserves attention. It is an ambitious book for tackling such a complicated little sliver of history, and Mayo brings her historic characters to life with a compelling story for a modern audience.
Rose City Reader

...impeccably researched and beautifully rendered. Those readers who love complex historical novels and who want to learn more about this time period in Mexican history will enjoy Mayo’s work.
Caribou's Mom Book Blog

...a story that is both grand yet intimate about a child who sparked an international scandal. The intriguing tale of the Prince of Mexico offers a fine historical lesson about why Maximilian’s paternalistic adventure in a country that did not want him was doomed from the start.
The Latin American Review of Books

The search for an heir is the ostensible subject... The couple find a boy who had been born to a grandson of the previous emperor of Mexico, Augustín Iturbide, and they sign a contract with the parents saying that they will raise him, starting at age two... If this is all too confusing, don't sweat it: everything is made clear, charmingly so, in The Last Prince of the Mexican Empire. The book is chockablock full of royal families, royal rumors, royal disputes, as well as being an Upstairs, Downstairs to 19th Century royal life of uplands Mexico.
The Review of Arts, Literature, Philsophy and the Humanities

T]his epic novel takes on a convoluted period in Mexico's history and the complicated families ruling or eager to rule in the mid-19th Century. Mayo does exceptionally well with multiple points of view, description, and character development to create a vivid dramatization. The Last Prince of the Mexican Empire would make a great book club selection and discussion.
Savvy Verse & Wit

Click here to read excerpts, view photos, and much more.