Sunday's reading at the Writers Center in Bethesda MD was such a delight. My dear amiga, historical novelist and fellow Writers Center faculty member, Ann McLaughlin, gave the introduction and read her favorite passage from The Last Prince of the Mexican Empire-- which she knows so well, having critiqued multitudinous drafts! For the record, it was the scene where Maximilian watches the sunset from the roof of Chapultepec Castle, rendered, but of course, in Maximilianesquely labyrinthical syntax (& toss in the Deities of Memphis, swords of light, an eagle skimming the treetops...) Gracias Ann!

Read Art Taylor's full report on the event over at Art & Literature...

And thank you also to everyone at the Writers Center, especially Sunil Freeman and Kyle Semmel (the Writers Center's blogger extraordinaire--- check out First Person Plural)-- and my fellow readers, poet Luis Alberto Ambroggio and his translator, poet Yvette Niesser Moreno (pictured right, photos by Kyle Semmel), who read such superb poems and so beautifully. Their new book, Difficult Beauty, will be available shortly.

It was a heartfelt pleasure to see my dear friend travel writer Sara Mansfield Taber, as she was the one who, many years ago, when we were fellows at Bread Loaf, first introduced me to the Writers Center. Other writers in attendance: Dylan Landis, who has a new and much-vaunted book of short stories coming out this fall, and my fellow Unbridled Books novelist, Stephen Evans; John Curry (with whom I'm cooking up a panel for the American Independent Writers Conference this June-- stay tuned; the talented short story writer and novelist Ellen Prentiss Campbell; poet, translator and publisher Robert Giron (who just brought out an amazing anthology, Poetic Voices Without Borders 2); poet and childrens book writer J.D. Smith (whose book on mariachis will be featured on this blog asap); poet and Momotombo editor Francisco Aragon; poet Judy McCombs, book blogger Serena Agusto-Cox (at her blog, Savvy Verse & Wit, check out her report-- and a contest for a free copy of The Last Prince of the Mexican Empire) and fiction writer Art Taylor, who reports for Arts & Literature.

And last but certainly not least, medievalist and blogger (Quid Plura?) Jeff Sypeck, who alerted me to a tromp l'oeil of--- surely it is--- President and Mrs. Grover Cleveland, on the side of a 7-11 at the corner of Connecticut and Porter, DC. 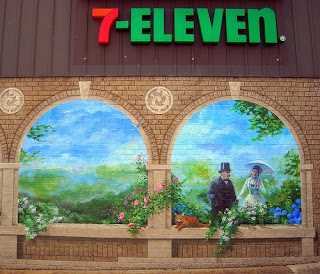 What, by Jove, does this have to do with my novel? Well, the prince's mother, nee Alice Green, grew up at Rosedale, then one of the grandest country estates in the District of Columbia. In the late 19th century, a substantial chunk of it was sold to President Grover Cleveland. His country house has since been torn down, but the now very urban neighborhood around old Rosedale is known as Cleveland Park.

Thanks to all my friends, Americans and Mexicans, long-time and new, it was grand to see you!