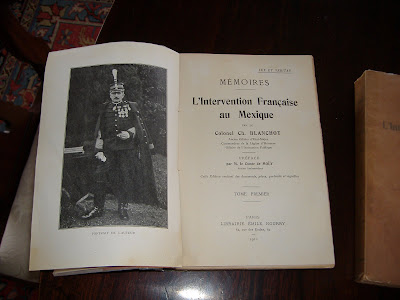 Another Maximilian bibliography note: Mémoires: L'Intervention Française au Mexique by Charles Blanchot. Published in 1911, this very rare memoir by Charles Blanchot, aide-de-camp to General Bazaine, Supreme Commander of French Forces in Mexico during Mexico's Second Empire, took me several years to find. Year after year, I "googled" it until finally it showed up on the page of an antique book dealer in Paris. The price was, in Euros, the equivalent of 700 dollars. I'll admit I waffled. But I am glad indeed that I bought it--- or rather, the 3 volume set with its pages uncut (I had to use a steak-knife to slit them open--- quite an operation). There is so much in here that has never seen light in either Spanish or English, for instance: the powerful if behind-the-scenes role of Doña Juliana de Gómez Pedraza, widow of Manuel Gómez Pedraza, and the vicious if, as Blanchot suggests, unfounded rumors circulating in Mexico City about Bazaine in 1866-7. Blanchot, who married an American of French origin in Mexico City, also offers a detailed and lively portrait of Mexico City society at the time. 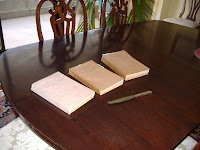 His memoirs informed several scenes in my novel, The Last Prince of the Mexican Empire, in particular, the chapters "March 1, 1866: Basket of Crabs" which includes the mention of the very suspicious and sudden death of French financial expert Monsieur Langlais and "March 4, 1866: Rio Frio," about the murder of Baron Charles d'Huart. Not in my novel but fascinating and sad reading is the chapter on his arrival with General Bazaine in Toulon, France. More anon.
Posted by C.M. Mayo at 11:13 PM