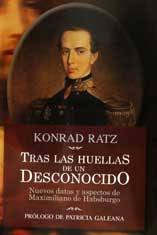 "This book does not attempt to rewrite the complete history of Mexico's Second Empire, but it does aim to fill several gaps in Mexican historiography by bringing forth accounts translated from the German, which because of the language barrier, have not been considered in Mexico. These are not only memoirs and diaries of the period, but also recent monographs, both published and unpublished, in German.

In 1974, the Austrian historian Adam Wandruska (1914-1997) professor at the University of Vienna and a leading expert on the history of the Habsburgs, formed a interdisciplinary group of researchers for an exhibit on "Maximilian of Mexico" at Hardegg Castle in Lower Austria. This had been the property of prince Karl von Khevenhueller, who had fought for Maximilian as commander of the Austrian hussars. Subsequently he became a friend of Porfirio Diaz. This lifelong friendship, apart from various extraofficial diplomatic contacts, greatly contributed to the resumption, in 1901, of diplomatic relations between Mexico and Austria, which had been severed in 1867...

... [In addition to these contributions by Professor Wandruska and his group of researchers, this work] covers the unpublished memoirs of the gardener and botanist Wilhelm Knechtl; the diary of Johann Stefan, first engineer on the Novara; published works on the Austrian Volunteer Corps by Edmund Daniek and on the Mexican Austrian Volunteer Corps by Felix Gamillscheg; the research by Norbert Stein on Father Fischer; a brief but essential and richly detailed work by Johann Lubienski on government institutions under Maximilian, and Felix Wilcek's thesis on Maximilian's income and expenditures in Austria.... [And] in a final chapter I have added a biographical sketch of Egon Cesar Corti, biographer of Maximilian and several other European sovereigns and dignitaries. Unfortunately, given the lack of biographical information and misunderstandings with the University of Vienna, which never offered him a professorship, the 50th anniversary of his death in 1953 went unnoticed in Mexico as well as his native country."

As Mexican historian Patricia Galeana writes in her prologue (my translation),

"...Konrad Ratz's work has great value for Mexican as well as Austrian and European historiographies on the Second Empire. He brings us new details and in such clear prose with short chapters that we may read it as a novel, though it is based on solid foundations thanks to meticulous historical research.... we discover the weaknesses and strengths of Maximilian, the romatic politician who dreamed of being the new Quetzatcoatl, Mexico's savior."

Tras las huellas de un desconocido has my highest and most enthusiastic recommendation. Indeed, no bibliography of Maximilian and the Second Empire would be complete without it.

I'll be posting a note about some of Dr. Ratz's other works anon.

P.S. Yes, I was able to incorporate some of this new information into my novel, The Last Prince of the Mexican Empire. In particular, it helped bring into a sharper focus that shadowy arch-conservative intriguer, Father Fischer; Maximilian's education; and Maximilian's relationship with Count Bombelles.
Posted by C.M. Mayo at 8:51 PM