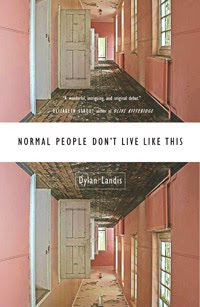 One of the books I am most looking forward to reading is my fellow Sewanee Writers' Conference alum Dylan Landis's Normal People Don't Live Like This, a novel in stories which is already--- it won't even be published until September 28th--- generating a hive 'o buzz. You'll be able to buy it on amazon.com shortly, but better yet, meet the author and get an autographed copy at Washington DC's venerable Politics & Prose on Sunday October 11th @ 1 pm. Dylan Landis shares an unlikely background with Edith Wharton: prior to embarking upon her literary career, she was an expert interior design writer. So it's no surprise that when I asked her to guest-blog with 5 in-some- way-relevant-to-her-book links, they were all about spaces. Read on.

I'm obsessed with ruined houses, grottoes, rooms that appear in dreams, underground places that invite trespass--even hoards and the distress that hums from deep within them. None of these mysterious spaces made it into the books I used to write on interior design. Five links I find magnetic:

1. I was fifteen when my diary got read at a friend's house, and never kept another. But visiting Paris I kept a travel journal for Leah, a teenage girl in Normal People Don't Live Like This, and she adored the exquisite bone-bejeweled rooms of the Paris catacombs; she took notes down there for hours, and it led to the story "Delacroix."

2. This dreamlike aviary at the Villa Arvedi in Italy was photographed by photographer Douglas Busch (who builds his own cameras); a copy hangs over my writing desk. Two of my characters, both mothers of teenage girls, have repeating dreams about finding a secret room. This could be one of those rooms.

3. The Collyer Brothers could barely squeeze through the accumulated hoard in their 12-room Harlem mansion; it subsumed 84 tons of inherited and scavenged stuff--newspapers, pianos, chandeliers, a horse's jawbone, clocks, and eventually their own bodies. E. L. Doctorow's new novel, Homer and Langley, mines the story; so does the Frank Lidz bio Ghosty Men.

4. Heartbreaking and mesmerizing: the abandoned Cane Hill Asylum in London—where both the vacant rooms and scattered patient records have stories to tell.

5. It's illegal to set foot on North Brother Island in the East River of New York, where an overgrown quarantine hospital still stands--along with the cottage where Mary Mallon, whom the press called Typhoid Mary, spent her last years. (I'm writing a novel about her now.) Photographer Rachelle Fernandez captured the haunted quality that survives here.