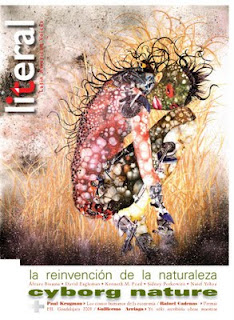 Speaking as a writer, I am happy to see a new literary journal, and thrilled indeed to come across one of such style and quality as Literal. Just the mention of few of the Mexican writers and poets in its pages should say more than I ever could: Pura López Colomé, Alberto Blanco, Adolfo Castañon, Tanya Huntington Hyde, Fabio Morábito... 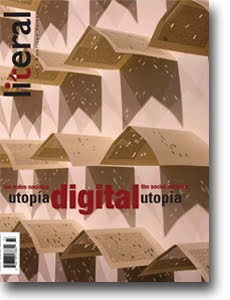 And speaking as a literary translator, I am delighted. We translators should all celebrate Literal, for there are so few publications of quality that are open to, never mind so actively promote literary translation. (It pains me to say this, but this is especially true in the United States, my own country.)

I am a writer and a translator of contemporary Mexican fiction and poetry, and in these two roles I have had the honor of participating in Literal. But in my talk today I would like to put on a different hat, as they say: that of editor.

As an editor, I am a great admirer of Rose Mary Salum. About ten years ago, I founded a journal called Tameme. Tameme had a somewhat different concept--- it was bilingual, everything in

both Spanish and English presented strictly side-by-side; it published fiction, poetry and creative nonfiction (no interviews or book reviews); and it only included works by living writers from or residing in Canada, the U.S. and Mexico. I don't mean to go on about Tameme; my point is that I know that editing a bilingual literary magazine is a path paved with satisfactions and strewn with surprises, some magical, and many, well, consternating. To launch and continue publishing any literary magazine is not easy. So to Literal, to Rose Mary Salum, my sincere respects.

I recall a conversation we had some years ago about Botteghe Oscure. This was a magazine founded by Marguerite Caetani in Rome (named after the street), and published from the late 1940s through 1960. She published in four languages: Italian, French, German and English and such writers as Dylan Thomas and Guiseppi di Lampedusa. Botteghe Oscure was an inspiration for George Plimpton, an American writer who was one of the founders of

the Paris Review. Based for many years now in New York City, the Paris Review is one of the leading literary journals in the U.S. In my case, with Tameme, I can mention as inspirations The Paris Review and El Corno Emplumado / The Plumed Horn , which was founded by Margaret Randall and

Sergio Mondragon in Mexico City in the early 1960s. El Corno Emplumado is perhaps best remembered for publishing Octavio Paz in English, but it has a fascinating history. Another inspiration was Mandorla: New Writing from the Americas / Nueva escritura de las Americas, founded by Roberto Tejada in Mexico City in the

early 1990s. After I founded Tameme (gosh, this was in the days before the Internet took off), I learned about the superb Two Lines, a journal of translations of writing and poetry open to all languages, founded by the California-based translator Olivia Sears. Two Lines has published many of the leading Mexican writers and poets.

I'm not going to go into the detail of the history of literary journals and their founding editors; I mean to say, we are--- as is anyone bold enough to start a literary journal--- part of this tradition. And Literal is a mega-bright star in the not-so-big constellation of bilingual magazines. I don't think it's possible to exaggerate the importance of Literal and the many reasons we have to celebrate it.

As an editor, I'd like to talk a bit about the work, which is so much more wide-ranging and complex than most writers and translators realize. As editor of Tameme, I have learned many lessons, some quite painful. To successfully publish a literary magazine, one needs a range of abilities and while many people have some or a few of these, it is rare indeed to find someone blessed with all of them. First and foremost, one needs the ability to recognize literary quality, to evaluate and select. Second, one needs courage, huge dollops of it, for not only is publishing a journal a public act--- and any public act invites criticism, even ridicule or worse--- one of the key abilities of a good editor is the ability to say, "No." No to friends, no to famous writers, no to wannabe writers, no to, well, all sorts of people. Believe me, when you launch a literary magazine you will find no shortage of manuscripts. If you're an arrogant narcissist, saying "No," is a click of the fingers. (Certainly we all know of some sadists who rather relish it.) But if you have a good heart, having to say, "No," can be one of the least pleasant parts of this work. I know Rose Mary Salum has a good heart, and I know this part of the work cannot be easy. In addition, an editor must also have managerial skills. To work with a board, with assistants, and designers, as with any team, requires such skills but in the case of working with writers and poets, well, are we not like cats? Try herding cats!

Then there are administrative skills. There are permissions to be complied with--- letters, contracts, payments. One has to choose a printer, after taking bids, calculating the cost of certain types of paper-- this thickness or that, acid-free or what. How many to print? Arranging shipment and warehousing.

And one has to be an expert in marketing. (Marketing! Goodness, can't you go to university and get a couple of degrees in this field?) To put it simply: how to bring the magazine to the hands of its readers? We don't want the boxes sitting unopened in the warehouse!

In sum, editing a literary magazine is like trying to juggle a watermelon, a few squealing mice, the aforementioned cats, a hippopotamus or three, and a block of cement. What is the block of cement? Why, distribution. God, distribution. I've been a member of a private e-mail discussion group for editors of literary journals and I can't quote or name names but believe me, I've heard the stories.... distribution... it's an unholy nightmare. But when I go into a Sanborn's, I always see a copy of Literal. And they're doing a fabulous job getting the word out with the website, the blog, and facebook and twitter. Rose Mary Salum, and the team at Literal, my respects!! 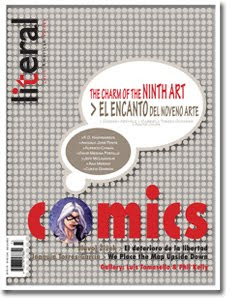 I don't have time to comment in more detail about Literal's extraordinary editorial vision. Suffice it to say that if you look at any issue's table of contents you will see the richness and originality of the selections. There are interviews with such outstanding figures as Junot Diaz, Oscar Hijuelos, Hernando de Soto, and Wangari Maathai; essays by Margot Glanz (on the Orient Express), David Medina (on GMOs), Alberto Chimal (on Edward Gorey--- speaking of cats!), John Mason Hart, one of the leading historians of Mexico, Maarten van Delden on Jose Martí, and fiction by Rosa Beltrán, Juan Villoro... I haven't yet mentioned the gallery section, with photography, sculpture, painting, and even an entire issue dedicated to the art of comics. Literal embraces not only Latin America but the world, ideas, art--- it is an intellectual magazine; intellectual in the best sense of the word.

In not only launching Literal but keeping it going stronger than ever for five years is an extraodinary achievement. As an editor, Rose Mary, my heartfelt congratulations to you. As a writer, as a translator and most of all, as a reader, my heartfelt thanks. May Literal have all the success it deserves and long, long life.

Translation of a talk given at the Feria Internacional del Libro, December 1, 2009.


***UPDATE: See my podcast interview with Rose Mary Salum for Conversations with Other Writers
Posted by C.M. Mayo at 11:56 PM