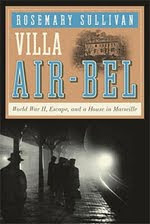 #3. Linked: How Everything Is Connected to Everything Else and What It Means for Business, Science, and Everyday Life by Albert-Laszlo Barabasi
The mega-paradigm shift explained by a leading networks scientist in plain, if elegant, English. Though this book first came out in 2002, it's well worth reading for the light it shines on the current financial crisis.

#4. My Grandfather's Finger by Edward Swift
An eccentric, elegant, and unblinkingly compassionate memoir of growing up in the thick of the Big Thicket.

#5. The House at Sugar Beach: In Search of a Lost African Childhood by Helene Cooper
A story every American should read.

#6. The Many Lives and Secret Sorrows of Josephine B. by Sandra Gulland
An epistolary novel that brings the French Revolution and not only Josephine, but many of France's most intriguing personalities to such life, it sometimes seemed hard to believe I was reading fiction. Gorgeous.

#7. Midday with Buñuel by Claudio Isaac
I was both charmed and moved by this poetic memoir by Mexican filmmaker and writer Claudio Isaac about his friendship with his mentor, the Spanish surrealist Luis Buñuel, who died in Mexico City in 1983.

#9. Losing Mum and Pup by Christopher Buckley
Mum and Pup of the title were William and Pat Buckley whom I-- and many millions of other Americans--- knew by their glamorous doings as chronicled in the likes of W. This is a headshaker of a memoir, but then it's about a very peculiar and supremely public couple, and by their son. Beautifully written. One of those few books that merits a re-read or three.

#10. Living by Fiction by Annie Dillard
What a splendid book. She's also a master of the intended diction drop-- which is sometimes hilarious.