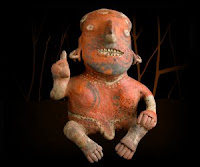 For the last few years, on Wednesdays except when not, this blog has featured guest-bloggers as varied as travel writers, a medievalist, a Feng Shui expert, several poets, a multitude of novelists, a chef, a documentary filmmaker, and the King of the Baja Buffs, all with with new books, websites, blogs, workshops, you name it, apropos of which they offer you, dear surfer, five links. Now that the holidays and the scaling of a few unexpected Himalayas are in the rear view mirror, Madam Mayo blog resumes this feature y con mucho gusto! There's a great line-up for the next few Wednesdays, and today, Mexico-based writer, photographer, and Spanish translator Jane Onstott (not pictured left). Mexico aficionados, and anyone thinking of venturing south of the border, be sure to visit her chock-full-of-info website, Mexico Guru. Over to you, amiga!

Five Mexican idioms that don’t mean what you might think

“Un poco” means “a little,” and following the Mexican custom of turning everything possible into a diminutive, is often expressed “un poquito,” or “a little bit.” But when your significant other responds “¿A poco?” to your explanation of last night’s midnight visit to a sick friend, he or she is expression a friendly skepticism about your selflessness. In a milder sense, “A poco,” means “Really?” can be useful as a space filler or when you aren’t sure how to respond.

Changuitos are “little monkeys,” but to Mexicans, it’s the same as saying “Cross your fingers” or “With any luck.” If young Irma asks her best friend, “Can you get out of babysitting to go to the party?”, her young pal might cross her fingers and reply, “¡Changuitos!”

This means “elbow,” but if your blind date scowls at you and mumbles the word “codo,” she’s not referring to your anatomy. When you refuse the pick up the check for the third straight time, your best friend might very well call you “codo,” or cheap, to your face. If she rubs her elbow, it means the same thing.

#5 What would you think if someone told you to “Go fry asparagus”?

Don’t bother running to The Food Channel or The Joy of Cooking; you’ve just been insulted. Telling someone to go “freir aspáragos” is the equivalent of saying “Take a hike! (Juanito told his friend: “My boss told me to expect a pay cut, ¡pero le mandé freir aspáragos!”)