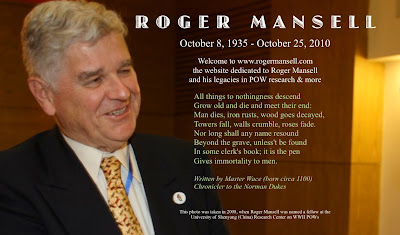 After a long battle with cancer, Roger Mansell, my dad, passed away early in the morning on October 25. He was a great father and he also left the legacies of his research, archive, and encouragement and example. After a career in business (mainly in the printing industry) he dedicated himself to researching the Allied POWs under the Japanese during WWII. He was never a POW himself; he had served as a lieutenant in Korea in the late 50s. It was his love of history and the opportunity to be of service that prompted him to dedicate more than twenty years to compiling an unprecedented data base on the POWs under the Japanese. He also dedicated many of his days to helping other researchers, both professional and amateur, including many family members of POWs who were trying to find out what had happened to their fathers, grandfathers, uncles, and friends.

The data base, with its camp rosters and much more, is at www.mansell.com.

His forthcoming book, The Forgotten Men of Guam, is being edited by historian Linda Goetz Holmes. It tells the story of what happened to the military men and civilians (mainly Pan Am Clipper crews) who were captured on Guam after Pearl Harbor in 1941.

Over the years he had amassed a magnificent archive of World War II-era research materials consisting of more than fifteen linear feet of documents, including memoirs and interviews with survivors, some fifteen hours of video recordings, and approximately four hundred published titles (many extremely rare), which he donated to the Hoover Institution, Stanford University, last month. (Click here to read about the archive.)

Those of you in the literary and translation communities may know him as the publisher of Tameme, the bilingual literary journal, and later chapbook series, which I edited. Tameme, a 501 (c) nonprofit foundation dedicated to publishing new writing from Canada, the U.S., and Mexico, and its publcations, would not have been possible without his knowledge of printing and his help with the administrative tasks. I'll be posting more about his work for Tameme in another post soon. (I don't know yet what will happen with Tameme; I hope to be able to make an announcement about that early in the new year.)

Please visit www.rogermansell.com, the website I created for him, to read about his work, which I hope may continue to help people researching this period, and to tell this terrible story of the POWs, which had been so long buried in inaccessible archives.