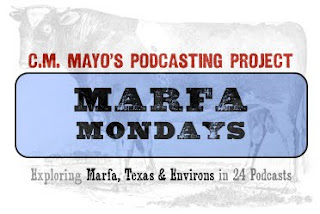 Today, Monday, January 16, 2012 is the launch of the Marfa Mondays Podcasting Project: Exploring Marfa, Texas and Environs in 24 Podcasts, one per month through 2013. This project is lieu of (though maybe in addition to) writing magazine articles as I proceed with a book project the title of which... well, it's way too early to say much about that. Suffice it to say it will be a travel memoir about West Texas.

>>Listen in to today's podcast here.

The next Marfa Mondays podcast will go live on Monday February 20th. I am not sure yet but I expect it will be about Cabeza de Vaca's epic journey through the region in the 16th century.

It's been an age since I did some travel writing. My book on Baja California, Miraculous Air, came out in (ayy!) 2002. Since then, I published a couple of long essays in literary journals, (The Essential Francisco Sosa or, Picadou's Mexico City and From Mexico to Miramar or, Across the Lake of Oblivion), but almost all my recent writing has been either blogging or fiction, e.g., The Last Prince of the Mexican Empire (2009), another novel in progress, and translations of work by Mexican writers Agustín Cadena, Álvaro Enrigue, and Francisco I. Madero. I am very much looking forward to doing more travel writing; apart from venturing into odd corners of the world, one of the things I love about it is the chance to interview people.