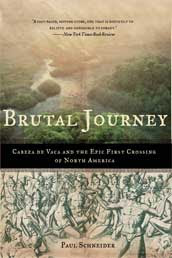 It's peculiar that Álvar Núñez Cabeza de Vaca is not better known. That old saw, "truth is stranger than fiction" applies in his case, or at least his version of events, which one might as well believe because the fantastic fact is, Cabeza de Vaca did reappear in northern Mexico in late April of 1536, one of only four survivors of the 400 who participated in the Narváez expedition to Florida in March of 1528. He left a memoir, translated as Castaways, and based on this, as well as other documents and archaelogical research about the peoples he encountered, Paul Schnieder has written a jaw-stopping story that reads like a novel. It's only January, but without a doubt, Brutal Journey will go on my top 10 books read list for 2012. A few links for surfers:

The Journey of Cabeza de Vaca 1542, translated by Fanny Bandelier, 1905

A bit about Guillermo Sheridan's screenplay for that same movie


UPDATE : Listen to my interview with Charles Angell.
Posted by C.M. Mayo at 1:41 AM