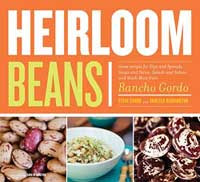 Steve Sando, founder of Rancho Gordo, may well be the most out-of-the-box bean farmer in the world. He's the author of Heirloom Beans, a beautiful book packed with information and recipes. I can highly recommend his blog and free newsletter, which you can signup on the blog or the main page. Click right here to shop on-line for Steve's hierloom beans and more. Over to you, Steve!

Five Beans You Aren’t Eating
By Steve Sando
I grew up eating pinto beans almost exclusively. My family enjoyed no Mexican heritage but the Mexican influence is hard to contain in California and my family’s “easy” food wasn’t mac and cheese but tacos. Ground beef, orange cheese, corn tortillas, Victoria salsa (with the meaningless picante thermometer) and of course Rosarita brand refried beans. My father would always claim to “doctor them up” but he never told us his secrets and I suspect it was something mundane like a pinch of onion powder or a few drops of olive oil. Whatever it was, it sold me at the time and I had a passion for beans.

Later, I discovered black turtle beans and these seemed about the most exotic and delicious thing I’d ever encountered. How could such a simple thing be so wonderful? For years, these two beans seemed to fit the bill. I learned to cook them from scratch, which at first seemed insane. How could I take something so hard and make it soft and dreamy? It turns out all it took was a little practice.

I had a career crisis as I rolled into my forties and the obvious answer to me was to take up gardening. It made little sense but I had the feeling that as long as I tended a small home garden, it didn’t matter so much which direction my career took. I could have made worse decisions. I would study the seed catalogues and plan the new year’s garden accordingly. By chance, I planted a bean called Rio Zape. I cooked many of them as a green bean and was happy but it’s when I let them dry and cooked them like a dried bean that my world changed. They reminded me of my beloved pintos but with much more depth and interest. I could detect a distinct chocolate flavor and wait, was that coffee, too? How is it that this bean was unknown and yet it was so easily superior to pintos?

Ten years later and the rest is history. I’ve made a career out of eating rare and wonderful beans and I think bland, commodity beans have their place in feeding a hungry world a cheap protein, but what a shame that we’ve barely scratched the surface with heirloom beans. There are dozens of great heritage varieties worth discovering but here are five, somewhat accessible, that you should know about.

1. Rio Zape
As I mentioned above, this pinto-like bean has hints of coffee and chocolate and is very easy to prepare. I love them with just an diced onion, a smashed garlic clove, water and the beans. The result is heady.

2. Ayocote Morado
Runner beans are in a different family than most common beans. They generally produce large, starchy beans that can be waxy or even buttery. Sophie Coe mentions them as one of the first cultivated crops in Meso-America in her seminal book, America’s First Cuisines. You see them in all sorts of colors at the markets and tianguis in Mexico and yet it’s super rare to see them on any kind of menu, even in Mexico. I like the purple ones (Morado) but the golden colored ayocotes from Puebla are also especially delicious. You may hear from an old Mexican grandmother that they are harder to digest than other beans but you should just smile and try them when she’s not around.

3. Vallarta
Presumably from the state of Jalisco, this bean was fancied by Thomas Keller of the French Laundry in Napa Valley and Per Se in New York. It had never been a very popular bean but because Chef Keller loves it, we grow it and now this bean that was on the brink of obscurity is being grown commercially and is well-loved by chefs. It’s very rich and I think it needs some bitter greens to offset its dense texture.

4. Christmas Lima
If you remember limas primarily as a member of the frozen food staple, “vegetable medley”, you probably hate them. If you have an open mind, you will love these lima beans, also known as Chestnut Limas. They have a chestnut texture and meaty bean broth. Try them tossed with sautéed wild mushrooms and just a little too much garlic and you will swoon.

5. Mayocoba
If you live in central Mexico, you probably have had Mayocobas, also known as Peruanos and sometimes Canario beans. They’re versatile, quick cooking and thin-skinned so they can be used in dozens of different ways, from soups to salads. Most Mexicans will cook them with a little onion and lard but if you cook them in a more European style, with finely diced mirepoix (celery, carrot and onion) and garlic with a little olive oil, they almost taste like you’ve cooked them in chicken stock. They also make a fine refried bean.

---> For the archive of Madam Mayo guest-blog posts, click here. The most recent is Andrew Dayton on 5 Book to Get Your Head Inside Iran.
Posted by C.M. Mayo at 7:11 AM