If you're picking up this blog on RSS feed, facebook, or amazon.com, please note that this (below) is the correct text for Harry Morales' guest-blog post. (I mistakenly posted a basic bio a few hours ago. -- C.M.) 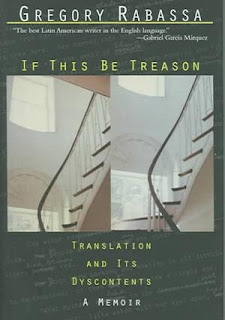 Friday March 9, 2012 is the 90th birthday of literary treasure, translator extraordinaire, Gregory Rabassa. In honor of his birthday, my amigo and fellow Spanish translator, Harry Morales, contributes this guest-blog post about his mentor.

IN CELEBRATION OF GREGORY RABASSA

"Since Kindness be the Venus-star of Friendship and that Bright Star doth Light the Lowest Hill, May Praise be Worthy of the Highest Good.” -Jack Kerouac, November 18, 1949

In my estimation, he is the finest Spanish literary translator in the world, whose art is rivaled only by his enduring and unburdened skills as an educator. He is the recipient of numerous awards for his work, including the National Medal of Arts-- which “is the highest honor conferred to an individual artist on behalf of the people,” and presented by the President of the U.S. to only a dozen or so individuals per year across the country-- and most recently, the inaugural Thornton Wilder Prize for Translation from the American Academy of Arts and Letters, and the Order of Prince Henry the Navigator from Portugal. He has translated over 50 books from the Spanish and Portuguese, starting in 1966 with Rayuela (Hopscotch) written by his beloved friend, Julio Cortázar.

I salute you Greg, on bent knee and enduring love and respect for your guidance and unconditional friendship in this work of ours. I would not be the translator I am by a shaky third if I had not attended-- by conscious design-- your Literary Translation Course at the New York State Summer Writer’s Institute at Skidmore College in Saratoga Springs. Since those two weeks, soon approaching 22 years ago, I have attempted to live up to your ideals and everlasting respect for the written word. Perhaps this post appears a little too formal and calculated, but alas, the sentiments herein indeed drop many miles away from what I dearly mean. In the end, I happily acknowledge the following poem, “Das Lied um die Guten Leute” (“The Song About the Good People”) by Bertolt Brecht, the subject of which can justifiably and easily be you, Greg, perhaps multiplied:

“One knows the good people by the fact that they get
better when one knows them.
The good people invite one to improve them - for
how does anyone get wiser?
By listening and by being told something.
At the same time, however, they improve anybody
who looks at them and anybody they look at.”

>>Morales' translation of an essay by Alberto Ruy Sánchez appears in my anthology, Mexico: A Traveler's Literary Companion (Whereabouts Press, 2006).

>>Listen to the podcast of the PEN Conversation with Gregory Rabassa, Edith Grossman and Michael F. Moore in which they discuss magical realism and the problem with “isms” the overwhelming influence of Cervantes; President Clinton’s favorite book; disastrous moments in translation; getting lost as a translator; the instinct of choosing the right words.