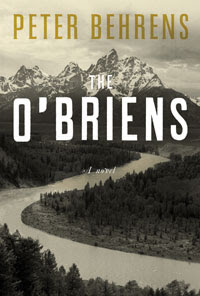 St Patrick's Day edition! My guest-blogger today is my Yaddo and VCCA amigo, Peter Behrens, whose most recent novel is The O'Briens (Pantheon, March 2012), which has been garnering glowing reviews as he takes it on a coast-to-coast tour. Behrens is also the author of the historical novel The Law of Dreams, and he blogs about trucks, cars, highways, aesthetics, and good writing at autoliterate. Where does he get his inspiration? Maybe it's from hanging out part of the year under the starry skies of Marfa, Texas. The New York Times recently profiled Behrens and his family in A Moth to Marfa's Flame: At Home with Peter Behrens by Penelope Green, along with a slide show, A Winter Home in the West Texas Desert. That said, the best novelists always draw inspiration from other novelists; here are five Behrens recommends.

Alistair Macleod. His novel No Great Mischief won the International IMPAC Dublin Literary Award in 1999. The novel is superb but the best of his short stories are transcendant. They were originally published in 2 collections: The Lost Salt Gift of Blood and As Birds Bring Forth the Sun. (The 2 volumes were collected and published in the United States as ISLAND in 2000. There are any number of Checkhov-calibre Macleod stories: two of my favorites are "Vision", and "The Closing Down of Summer". "The Tuning of Perfection" belongs right up there as well. Macleod was born in Saskatchewan, into a family of expatriate Nova Scotians. They soon returned to NS, and MacLeod grew up in Inverness County, on Nova Scotia's Cape Breton Island. The culture he grew up within was shaped by Catholic Highlanders and Islandmen who emigrated from Scotland in the middle of the 19th century. It's a world much involved with the sea, and with fishing and coal mining; where Scottish Gaelic is still a common language (more common on Cape Breton than in Scotland, in fact.) The ancient world infuses Macleod's stories, but they are anything but quaint, sentimental, or bucolic. The stories operate like novels: they contain worlds; they are often open-ended. They resonate.


Joseph Boyden so far has published two remarkable novels, Three Day Road and Through Black Spruce. Three Day Road is about Cree solidiers serving in the Canadian Army during WWI. Through Black Spruce which won the Scotiabank Giller Prize in 2008. It's protagonst is a legendary bush pilot, son of one of the characters in the first novel. Boyden has Mètis heritage and his characters come out of that rich, impoverished, complex northern world of mixed race and mixed identity. Sometimes they choose between the northern world and the world "away"; sometimes the choice is made for them. They engage with the history of their time. This guy knows how to write. Beautiful sharp sentences.

Alice Munro. Why hasn't this writer won the Nobel Prize? Call me paranoid, but could it be because she's Canadian? Canada is too safe, white, and familiar to be exotic, but does not have the heft and presence on the international literary stage that say the US, Britain, and France do. There has been a spectacular "naissance" (as opposed to renaissance) of Canadian literature in English over the last twenty-five years, and I believe that the clear, weird, dangerous, beautifully constructed, and deceptively simple Munro stories that over the last four decades have been appearing in The New Yorker and in collections like Lives of Girls and Women, The Moons of Jupiter, and The Progress of Love are part of the reason why. The best Munro stories operate as very dense, very rich, compact novels. Nothing gets tied up neatly. Try her story "The Albanian Virgin", for example. Nobel judges please sit up and take notice: there are few writers who have created such a brilliant body of work over a long career. The title of her 2001 collection was Hateship Courtship Friendship Loveship Marriage but Munro's no miniaturist: her themes are the major ones.

Clark Blaise Blaise is finally getting (overdue) attention this year, thanks to the success of his recent story collection, The Meagre Tarmac. I'm happy to consider Blaise a Canadian writer even though he was born in North Dakota, attended the Iowa Writers' Workshop (during the illustrious Ray Carver era), and has lived and taught in the United States for most of his life. His parents were both Canadians, from opposite sides of the cultural divide (English/French; Western/Quebecois; middle class/not middle class). Blaise grew up mostly in the Deep South, and in the Midwest, where his French Canadian father, Leo Blais, recreated himself as Lee Blaise, furniture salesman extraordinaire. Clark Blaise lived and taught in Montreal for a ten-year period, and that era produced some of his most remarkable fictions: (the stories in Tribal Justice, for example) I think Blaise found the city a perfect setting for stories that sift through the complexities of identity, heritage, the immigration experience, and the power and style of family myth. I wrote an introduction to his collection Montreal Stories. Blaise is married to the American novelist Bharati Mukherjee and has long been familiar with Indian expatriate culture in North America: the world of middle class Indian professionals is the universe he explores with deftness and panache in The Meagre Tarmac.

John McGahern Okay here's the Irish corner of my post. For me, McGahern's novel Amongst Women is about as perfect as a novel gets. McGahern is mostly known as a short story writer, and the stories are brilliant, but Amongst Women seems to draw deeply from the well of family background, and it is perfectly constructed and intense. A slender volume, it makes a reader realize that other novelists--particularly contemporary American male novelists--ought to think about leaving a lot more out of their tomes. McGahern's Irish men and women, in the hinterlands of Counties Monaghan and Roscommon, usually in the 1950s, live with ghosts and echoes and silences. His portrait of the father in Amongst Women--a bitter old man, once a rebel and a gunman--is stinging and humane. I haven't read his memoir, All Will be Well, but I'm going to.


+ + + + + +
---> For the complete archive of Madam Mayo guest-blog posts, click here.
Recent posts include translator Harry Morales on Gregory Rabassa's 90th Birthday; Steve Sando on 5 Beans You're Not Eating; and novelist Andrew Dayton on 5 Books to Get Your Head Inside Iran. Last year's St Patrick's Day edition was Michael Hogan on the Irish soldiers of Mexico.
Posted by C.M. Mayo at 6:13 PM