As I plow on with my Far West Texas book and related "Marfa Mondays" Podcasting Project, I am also finding my way into a whole new literary subculture and, through Women Writing the West, meeting, if only on-line for now, some very accomplished novelists. One of them, who also manages the Women Writing the West blog-- bless you, dear-- is Heidi M. Thomas, who has just published her third novel, Dare to Dream, about a Montana cowgirl who dreams of becoming a professional rodeo rider. Based on the life of Thomas' grandmother, who rode rough stock in Montana in the 1920s, this sweeping saga parallels the evolution of women’s rodeo from the golden years of the 1920s, producing many world champion riders, and shows its decline, beginning in the 1930s and ending with World War II in 1941. Heidi’s first novel, Cowgirl Dreams, won an EPIC Award and the USA Book News Best Book Finalist award. Follow the Dream, a WILLA Award winner, is her second book, and Dare to Dream is the third in the series about strong, independent Montana women. 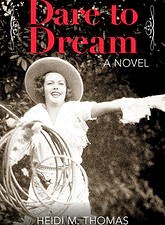 1. My “Dreams” series is based on my grandmother who rode bucking stock in Montana rodeos during the 1920s. Competing with and riding the same roughstock as men was not entirely socially acceptable, but there were a number of women who won world champion awards at New York’s Madison Square Garden Rodeo, in Canada, and in Europe. While Grandma did not become one of those famous cowgirls, she knew and competed with Marie Gibson of Havre, Montana (and won in a steer-riding competition in 1922). Marie won titles at Madison Square Garden in 1927 and 1931. She was killed in a freak rodeo accident in 1933.

2. Montana produced several bronc riding champions, including Fannie Sperry Steele, Alice and Margie Greenough, and Marie Gibson. The Brander sisters were two more of Montana’s rodeo sweethearts, often riding a bucking Brahma steer—double. They went on to establish a dude ranch and put on many rodeos for visitors.

3. The Miles City Bucking Horse Sale has been a well-known horse sale and rodeo in Montana since 1914. I remember attending the big social event of the year when I was in high school. Although I grew up on a ranch and helped my dad round up cattle for branding and shipping, I did not follow my grandmother’s boot steps into rodeo. For some reason I preferred not to get on anything that was going to buck me off!

4. The Madison Square Garden Rodeo of 1941 was the last time a woman was allowed to compete on the men’s circuit. Vivian White won the women’s championship title that year. My character Nettie in Dare to Dream mentors two young neighbor girls and they have to opportunity to attend that world-renowned rodeo in New York City.

5. The World wars had much to do with the demise of women’s rodeo competition. Rodeos in general declined because most of the men were off fighting and because there wasn’t money to put on rodeos or travel to them. The death of Bonnie McCarroll and Marie Gibson aroused the age-old question—Is rodeo too dangerous for women? The formation of the Rodeo Association of America also contributed, as the all-male organization did not sanction women’s events.

Heidi M. Thomas is in the midst of a blog tour. Check out her other guest-blogs via her blog.

>My guest-blog for Women Writing the West Blog on (yeah!) guest-blogging
Posted by C.M. Mayo at 1:06 PM