Catherine L. Albanese's A Republic of Mind and Spirit: A Cultural History of American Metaphysical Religion

A couple of months ago, for Tony Payan's class on Mexican Politics and Culture at Rice University, I gave a talk-- my first for this newly expanded work--- on Metaphysical Odyssey into the Mexican Revolution: Francisco I. Madero and His Secret Book, Spiritist Manual. Lots of bright kids, lots of good questions. One of them was, "Did Madero have followers?" After a blink, I realized what a telling question this is.

Of course, Madero had legions of followers-- after all, he was the leader of Mexico's 1910 Revolution and President of Mexico (1911-1913). But as a Spiritist? I explained that he did not set himself up as a kind of priest or guru; he was a healer and a medium (never working for pay) and, pseudonymously, the author of an evangelical text, which is the Manual espírita or, as I translated it, Spiritist Manual.

The thing is, when we think of "religion" we usually think of priests or ministers, large edifices, approved rituals, degrees of belonging or status, and so on and so forth-- in short, a social and physical architecture as a machinery of power. Though they had and have their temples and seminars and conferences, Spiritists did not then and do not now necessarily organize in this fashion, precisely because they believe that the individual can communicate directly with spirit and the Divine-- without the intermediation of an earthly authority. They have some temples, some congregations, (google and you'll find them in Mexico, the US, Brazil, Portugal, the Philippines, and Spain, and many more) but there are also many informal circles that meet in private homes. Like Wiccans, it would seem that some few (or many?) are solitary practitioners. Data? Well, that is precisely my point: there aren't much. It boils down to hearsay or, as in the case of a public figure such as Madero, careful archival research. And even still, the picture remains patchy. 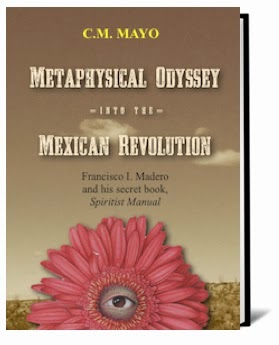 Quick backtrack for those of you shaking your heads and asking, um, what's a Spiritist?

An offshoot of American Spiritualism, which first appeared in upstate New York around 1850, Spiritism developed in France in the the 1860s. (There's so much more to say about it than that, and I do in my book.) The basic idea is, a human being is really an immortal spirit in a temporary body, and it is possible while in an earthly body, either by natural or cultivated talent, to communicate with spirits. Since one is immortal, one's earthy life should serve one's immortal life-- in a nutshell, don't take materialism too seriously and always try to do good. The basic ritual is the séance, which invokes the dead, inviting communication from them by a variety of means.


Before I get to my answer to the question-- did Madero [as a Spiritist] have followers?-- a note on religious organization. 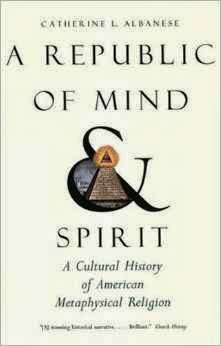 A Republic of Mind & Spirit: A Cultural History of American Metaphysical Religion

One of the most illuminating books I came across in my research is Catherine L. Albanese's A Republic of Mind & Spirit: A Cultural History of American Metaphysical Religion (Yale University Press, 2007). From the dust jacket description:


"This path-breaking book tells the story of American metaphysical religion more fully than it has ever been told before, along the way significantly revising the panorama of American religious history."

What has this to do with Mexico, the gentle blog reader might ask? Well, all the very same metaphysical religions that came to the US also arrived south (via various paths, not invariably from the US) in Mexico.

Continuing with the dust jacket description:


"Catherine L. Albanese follows metaphysical traditions from Renaissance Europe to England and then America, where they have flourished from colonial days to the twenty-first century, blending often with African, Native American, and other cultural elements.

The book follows evolving versions of metaphysical religion, including Freemasonry, early Mormonism, Universalism, and Transcendentalism-- and such further incarnations as Spiritualism, Theosophy, New Thought, Christian Science, and reinvented versions of Asian ideas and practices. Continuing into the twentieth century and after, the book shows how the metaphysical mix has come to encompass UFO activity, channeling, and chakras in the New Age movement and a much broader new spirituality in the present.

In its own way, Albanese argues, American metaphysical religion has been as vigorous, persuasive, and influential as the evangelical tradition that is more often the focus of religious scholars' attention. She makes the case that because of its combinative nature-- its ability to incorporate differing beliefs and practices-- metaphysical religion offers key insights into the history of all American religions."


Rather than considering these religions / ideas mere esoterica or superstition, mere footnotes in the grander history of denominational and evangelical churches (Roman Catholic, Baptist, Congregationalist, Pentecostal, Presbyterian, Lutheran, and so on), Albanese argues that the metaphysical religions are (p. 4) "at least as important... in fathoming the shape and scope of American religious history and in identifying what makes it distinctive-- the sign, in religious terms, of an emergent American ethnicity."

In other words, metaphysical religions have played a far more important role in our history than has been previously recognized. But it is difficult to research secretive groups that meet informally in private homes, and, on the other hand, relatively easy to research the history of denominational and evangelical churches.  (p. 8)


"There are central headquarters and archives, public buildings and structures with observable rituals, written personal testimonials, letters, and journals aplenty, with numerous press accounts of religious presence, to cite only the most obvious and accessible sources. To write the metaphysicians' tendencies into history, however, requires harder work."

In other words, it's all a big, ever-morphing muddle of a mosaic. And indeed, this was a big problem for me in trying to figure out Madero's ideas. He was a Spiritist but also a Mason, and some Masons were Spiritists but some were not, and some Spiritists were Theosophists, but Madero was not… and so on.

And both before and especially after Madero's death, Mexican Spiritism melded with folk beliefs and indigenous shamanism. (One example is the mediumnistic healer and folk saint Niño Fidencio, who was mentored by a German Spiritist but apparently did not consider himself a Spiritist.)

So, back to the question, did Madero, as a Spiritist, have followers?

Well, as a Spiritist, he played a leading role in organizing and evangelizing through magazines such as Helios and his book, Manual espírita. Certainly, as we know from his archives, he was in touch with and well-regarded by his fellow Spiritists, mostly Mexicans but also some Americans and Europeans, including Léon Denis, whose book, Après la mort, he published in Spanish (that translation by Ignacio Mariscal, then serving as Mexico's Minister of Foreign Relations.) Certainly people read Madero's works, but how many we do not know. He wrote them under pen names, mainly Arjuna and Bhima, both taken from the Hindu holy book, the Bhagavad-Gita.

Bottom line: As a Spiritist, Madero was looking to evangelize, but not necessarily to build a movement around his person, as he was in the political arena.

> Metaphysical Odyssey into the Mexican Revolution: Francisco I. Madero and His Secret Book, Spiritist Manual (website for the book)