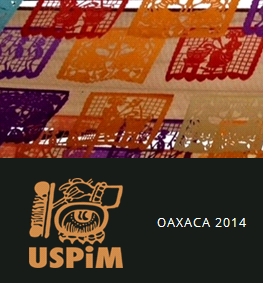 U.S. Poets in Mexico is holding what looks like an outstanding and very intriguing conference in Oaxaca this fall. Founded by poet Sheila Lanham in 2008, they are all about connecting U.S. and Mexican poets for translation projects.  Thanks, Clare Sullivan, for the tip.

Only a measy-weasly itsy-bitsy and jaw-droppingly ridiculous 3% of literature published in the U.S. is translated. Anna Clark illuminates.

(P.S. Speaking of Mexico and translation, grab your copy of my anthology of 24 Mexican writers, Mexico: A Traveler's Literary Companion. Big stories, bodacious translation, small package. Translation: Yes, it fits in your backpack.)

Not for the squeamish: my amigo metaphysical author John Kachuba on Mexico's Santa Muerte Cult. Take note: Kachuba is leading a Day of the Dead Cultural Tour in Oaxaca, check it out.

I drove to San Miguel (about 4.5 hours) from Tepoztlan with Sheila Urquidi for the 9th annual San Miguel Writers’ Conference in a state of high anticipation and the event did not disappoint. Calvin Trillin opened the conference to an audience estimated to be 900 listeners with 90 minutes of laughter that probably generated a room full of healthier people. I bought all his books for sale in the bookstore.

There were 7 keynote speakers that spoke either in the evening or after lunch and the next up was the poet, David Whyte, my favorite speaker of the conference. His poetry readings were outstanding and I can highly recommend his "Midlife and the Great Unknown: Finding Courage and Clarity Through Poetry.”

All keynotes were worthwhile to attend but I wanted to particularly note the talk given by Benjamin Alire Sáenz who received the PEN Faulkner award for his short stories in Everything Begins and Ends at the Kentucky Club. Sáenz brought down the house with a standing ovation from this crowd who so poignantly felt his message that on the border he is both Mexican and a native born American yet neither. The book is a read that will be of interest to all who stand with a foot in each of two cultures, as does Benjamin Sáenz, and the many readers of Madam Mayo’s blog.

As in previous years there were workshops of a very practical nature to encourage anything you might want to write: food writing, screen plays, children’s books, memoirs, novals, fiction and non-fiction, travel, really so much was available. Additionally, there were agents and publishers to listen to query letters.

There were simultanious translations and a few great presentations I missed (in particular the Co-cultural panel with Yann Martel, Benjamin Sáenz, and Alberto Ruy-Sánchez). This is an event well worth attending with a community of writers that whole heartedly work to make it give value. For example, not knowing who the poet David Whyte was before hearing him speak, I wanted to go to his presentation for which I had not signed up so the registrar suggested I stand outside to see if there were any empty chairs when the presentation started and happily, there were added chairs for the additional attendees like me. Every effort was made to make conference goers happy.

>More information and to register for the 2015 San Miguel Writers Conference.

The 4th annual Mexico Canadian Cultural Festival was held in Tepoztlan, Morelos with the theme of “Magic as Inspiration” February 14-23, 2014. The plan in years past has been for this festival to follow the one in San Miguel intentionally to allow book lovers to attend both events. However, the theater events, art presentation and workshop conducted by Juanita Pérez and Márgara Graf at La Turbina Gallery, and children’s community art show required an early start date to manage it all.

The Canadian moderator, Hal Wake, organizer of the Vancouver International Writer’s Festival, returned to applause and brought the following prize winning Canadians to present their works in the context of magic as inspiration: Lorna Crozier, a poet and author of many works, Steven Galloway, author of “The Cellist of Sarajevo,” Michael Crummey, Newfoundland poet and author of “Galore” an epic novel.

Canadian Doug Gibson, editor, publisher and friend of Alice Munro gave a presentation on his experience of accepting the Nobel Prize for literature on her behalf this year with the Canadian Ambassador to Mexico in attendance.The Mexican side of the writers included Ekiwah Adler-Beléndez, our loved local Tepoztlan poet who has previously presented at the Vancouver festival, Alberto Ruy-Sánchez, author of the Mogador trilogy which is available in English, and many other books, Verónica Murguía, prize winning author of young adult (YA) books, and José N. Iturriaga, a prolific writer on Mexico and the subjects of food, travel, eroticism and rituals. His latest book is Linaje de Brujos.

And the talented moderador for the Mexican authors is herself a writer, radio host, blogger, Mónica Lavín.

A special treat of the panel discussions was the number of Mexican and Canadian authors that had worked together previously at the Banff Center for creative writing in Canada. Simultaneous translations were available throughout and La Sombra del Sabino book store reached a new level of excellence in this 4th year of festivities. Classical guitarists Avin Tung and Morgan Szymanski performed a concert at La Buena Vibra Hotel, Janet Dawson held a meal to celebrate gastronomy, and Stuart Cox performed Shakespeare. There was culture for all.