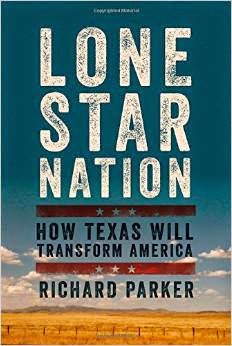 Texas Exceptionalism (TE): I would give it the knee-jerk reject but for the fact that after more than 25 years of living in another country (Mexico), if I've learned anything, it's that empathy for others' notions of themselves, off-kilter as they may seem, is not only the more politic but oftentimes the wisest stance (because the other thing I've learned is that there's always more to learn). Plus, as my birth certificate says, I'm a Daughter of the Lone Star State, so nudge its elbow and my ego is happy to hop along, at least a little ways, with that rootin'- tootin' idea. But I was not raised in Texas and, to put it politely, I've yet to grok TE. The way I see it at present, yes, Texas is a special place full of proud and wonderful people, with a unique history and an awesome landscape, and once we look with open eyes, ears, intellect, and heart, so is just about every other place, from Baja California to Burma.

That said, though in Lone Star Nation: How Texas Will Transform America, Richard Parker serves up a heaping helping of gnaw-worthy TE, it is an elegantly-written and important book examining trends and challenges for Texas — Texas first, Parker argues— and the nation.

Migration is changing Texas at warp-speed, and here, with an overview of the history of migration into the area, Parker makes the most vital contribution.

It was the Fifth Migration, from the Rust Belt of the 1970s and 1980s, that brought northerners with their Republican-leaning politics; the Fourth, Southerners, many of them Yellow Dog Democrats, coming in to work in the oil and related industries in the early 20th century; and the Third, Southerners arriving in the 19th century to farm and ranch in what was originally Mexican territory, then an independent Republic, then a slave state, then a member of the Confederacy, then, vanquished, reabsorbed into the Union. (The Second and First Migrations telescope thousands of years of immigrations from elsewhere in indigenous North America and, originally, from Asia.)

The current wave of migration, the Sixth, is bringing some 1,000 immigrants into the state each day, from Mexico, points further south, East Asia, South Asia, Europe, and all across the United States itself. And because of this, the over a century-long "Anglo" dominance is about to crumble.  Soon the idea of Texas itself may morph into something denizens of the 20th century might no longer recognize.

Yet where did that idea of Texas— this great state for big men in cowboy boots—  and the related TE— come from? How did it become an image fixed in not only the Texan imagination, but the national and international? I would have ascribed it merely to a mash-up of anti-Mexican Texan and US-Mexican War propaganda, the tales of literary legend and folklorist J. Frank Dobie, Southern wounded pride, and splashy bucketfuls of Hollywood fantasy, until I came to Parker's riveting detour into the history of the marketing of the World's Fair of 1936. That fair, held the same year as Texas' centennial, was celebrated with all get-out in Dallas. For its leading citizens, this was, Parker writes,

"the opportunity to recast Texas:  No longer a broken-down Southern state of impoverished dirt farmers, but one with oil and industry— an inspiration if not a beacon to hungry Americans looking for opportunity in the midst of the Great Depression.... Copywriters, journalists, and artists were hired to tell tales of cowboys, oil, and industry in the years leading up to the World's Fair."

But alas, this came with the racial nonsense of the time. Parker:

"Gone was the Mexican vaquero, the African American, and the Native American, or at least they were relegated to the role of antagonist.... A centennial exposition [Theodore H. Price, a New York PR man] argued, would teach attendees that the cowboy story was really a story of racial triumph..."

Some of Texas history is painful to read, painful as those punches Rock Hudson's character, Bick Benedict, took at the end of Giant, in defending his Mexican-American daughter-in-law (from being refused service in a café because of the color of her skin). Parker doesn't shy away from discussing some ugly and enduring racial problems in Texas, including in Austin, its capital and haven of liberalism, music, and righteously organic breakfast tacos.

At the time Lone Star Nation went to press in 2014, according to Parker, "nearly one in three people who call Texas home have arrived from elsewhere in the United States in the last year." The gas and oil boom have since collapsed along with the price of oil, so I would expect those numbers to have dropped; nonetheless, as Parker stresses, the overwhelming majority of immigrants end up not in the oil fields, but the "triangle," the area in and around Dallas, Austin-San Antonio, and Houston. The draw? "Better-paying jobs and bigger homes for less money."

Parker argues that better jobs are a function of education, and that therefore one of the challenges Texas faces is adequately funding its schools and universities while keeping tuition at affordable levels, especially for the working class and recent immigrants. But the political will may not be there; neither has it been adequate to cope with water shortages, both current and looming.

Parker's political analysis is seasoned but unabashedly biased. My dad, a California Republican, would have called it "Beltway Liberalism," and indeed, until returning to Texas, Parker, a journalist, was based in the Washington DC metropolitan area. I happen to agree with much of what Parker argues, but as someone trying to get my mind around Texas, I would have appreciated his making more of an effort to explore, if not with sympathy then at least empathy, the various strains of conservatism.

To illustrate the trends and challenges for Texas, Parker offers two scenarios for 2050: one in which Texas has not invested in education, nor maintained a representative democracy, nor addressed environmental issues, and so degenerated into a nearly abandoned ruin (think: Detroit meets Caracas meets the Gobi Desert); in the other, challenges addressed, Texas is a super-charging China-crushin' hipster Juggernaut. My own guess is that the Texas of our very old age will fall somewhere in between, vary wildly from one region to another, and be more dependent on developments south of the border than the author or, for that matter, most futurists, consider.

On this last point, in discussing the tidal wave of migration from Mexico, Parker mentions the Woodlands, a once upscale Anglo suburb outside of Houston, still upscale, but now predominantly Mexican. I would have liked to have learned more about this slice of the sociological pie, for in my recent travels in Texas, and from what I hear in Mexico, I've also noticed that a large number of well-off Mexicans have been moving to Houston, San Antonio, and Austin. I'm talking about Mexicans who speak fluent English, play tennis and golf, and have studied and traveled abroad in, say, New York, Vancouver, Paris. There's a bigger story there, for many of them are the wives and children, but not so many husbands, who spend weekdays at their offices in Monterrey, Guadalajara, or, say, Mexico City. These families have not come to Texas for the jobs, nor the wonders of that great state (whose loss still makes many Mexicans bristle), but primarily for their safety—  and, in many cases, for business opportunities. Should security improve in Mexico, I would expect many of these families to return and quickly. Whether that is likely or not is another question.

In sum, Lone Star Nation: How Texas Will Transform America is a rich, vivacious read that provides a sturdy framework to think about the past, present, and prospects of a state that is as much a place as it is, in the words of John Steinbeck, "a mystique approximating a religion." And if the author is a true blue believer in TE, well hell, bless him. Highly recommended.


>> Your COMMENTS are always welcome.

A Conversation with Rose Mary Salum
On Making Connections with Literature and Art
(includes discussion of Houston, Texas)

A Conversation with Sergio Troncoso
(includes discussion of El Paso)

Review of
Our Lost Border: Essays on Life Amid the Narco-Violence,
edited by Sarah Cortez and Sergio Troncoso

Review of
Desert America: Boom and Bust in the New Old West
by Rubén Martínez