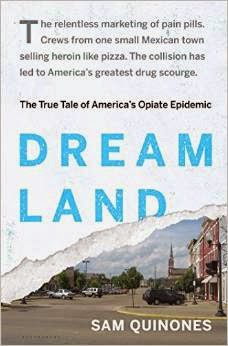 This is a grenade of a book. Based on extensive investigative reporting on both sides of the U.S.-Mexico border, Sam Quinones’ Dreamland tells the deeply unsettling story of the production, smuggling, and marketing of semi-processed opium base— or “black tar heroin”— originating in and around Xalisco, a farm town in the state of Nayarit, and in tandem, the story of the aggressive marketing of pain pills in the U.S.— in particular, of Purdue Pharma’s OxyContin—and the resulting conflagration of addiction and death.
Unlike previous drug epidemics—heroin in the 70s, crack in the 90s— this one involved more deaths and more users, and not so many in urban slums but “in communities where the driveways were clean, the cars were new, and the shopping centers attracted congregations of Starbucks, Home Depot, CVS, and Applebee’s.”
Mexican black tar heroin trafficking isn’t anything like what you’ve seen on TV or in the movies or, for that matter, most books about narcotrafficking. It’s a small-time and customer-centric business: smugglers carry small high-quality batches over the border, and then drivers, using codes received on their cell phones, deliver tiny balloons filled with heroin directly to individual customers. The smugglers and drivers, “Xalisco Boys,” for the most part— friends, neighbors, brothers, third cousins— are not ready-for-prime-time “narcos” but otherwise ordinary young men from an otherwise ordinary farm town.
Nor are these Mexicans crossing the border because they are drawn by the light of “a better life” in the U.S. Their goal is a short period of hard work—and if that work happens to be delivering balloons filled with some drug to gringo addicts, so be it—and then to return home with the cash to peel off for a house, a wedding banquet with a live band, a stack of Levi’s jeans for the clan.
The number of English language reporters who could have written such a book can be counted on one hand— if that. Quinones draws on two decades of covering remote corners of Mexico and Mexican immigrants to the U.S. His two previous books, both superb, are True Tales from Another Mexico: The Lynch Mob, the Popsicle Kings, Chalino, and the Bronx and Antonio’s Gun and Delfino’s Dream: True Tales of Mexican Migration. In Dreamland, Quinones writes about the “Xalisco Boys” with unusual insight and compassion [CONTINUE READING]

Nut Country:
Right-Wing Dallas and the Birth of the Southern Strategy
By Edward H. Miller

Our Lost Border:
Essays on Life Amid the Narco-Violence
Edited by Sarah Cortez and Sergio Troncoso