Nut Country: Right-Wing Dallas and the Birth of the Southern Strategy by Edward H. Miller 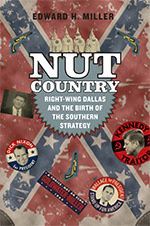 Just posted in the Washington Independent Review of Books:

NUT COUNTRY
Right-wing Dallas and the Birth of the Southern Strategy
by Edward H. Miller

In the early 1950s, for most Texas voters, the party of Abraham Lincoln had about as much appeal as Rhode Island barbecue. In the Civil War, Texas, a slave state, had fought for the Confederacy. Reconstruction brought Republican Party-rule, with its emphasis on establishing and protecting rights for freedmen. The backlash from largely ex-Confederate “redeemers” took only a few years to flush the Republicans from power.

Attacking them as “the black man’s party,” these Democrats called for racial solidarity among whites and for rolling back the rights of African-Americans. For decades to come, Jim Crow Texas, like the rest of the South, was controlled by the so-called “yellow dog Democrats,” Democrats who would vote for their party’s candidate, even if he were a yellow dog. Yet by the 1960s, the Republican Party, now espousing conservatism, came roaring back in the Lone Star State.

Since I'm working on a book about Far West Texas,
most of my recent reviews are of books about Texas.

The Pecan: A History of America's Native Nut
by James McWilliams

Our Lost Border: Essays on Life Amid the Narco-Violence
edited by Sarah Cortez and Sergio Troncoso

My book review policy
(in case you were wondering)