For the American Literary Translators Association (ALTA) Conference in Tucson late last month, apart from participating on Mark Weiss's excellent panel "Translating Across the Border," I proposed and chaired a panel that addressed a topic that, in truth, could have been considered for translating poets and writers in any of the populated continents:

>>CONTINUE READING THIS POST ON THE NEW PLATFORM AT WWW.MADAM-MAYO.COM

The panelists were Yours Truly (transcript of my talk follows), Jeffrey C. Barnett, Patricia Dubrava, and Clare Sullivan. In the audience: several very distinguished literary translators (lotus petals upon y'all). The Q & A was extra crunchy, and in true ALTA fashion, in the sweetest way. (Seriously, literary translators, and especially the crowd that regularly attends ALTA conferences, are angelically generous and encouraging. If any of you reading this have ever thought of trying literary translation and/or attending a literary translator's conference, my recommendation is, YES!) 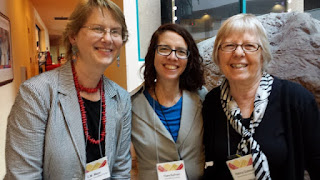 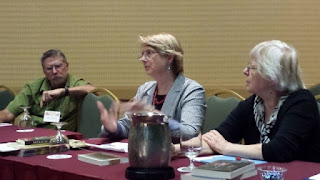 
I started translating in Mexico City in the early 1990s. Mexico City is Mexico's capital, but it's not analogous to Washington DC or, say, Ottowa, Canada. The megalopolis, "the endless city," as Carlos Monsivaís calls Mexico City, is like Washington DC, New York, Boston, Chicago, Miami and Los Angeles, all piled into one. In other words, its the political capital, financial capital, publishing capital, cultural capital, and television and movie capital. Oh, and business capital, too. Yes, there are other important cities in Mexico, and they have become more important in many ways, and some of them have some excellent writers and poets. But Mexico City is MEXICO CITY.

Back in the early 1990s, the ruling party, the PRI or Partido Revolucionario Institucional or Institutional Revolutionary Party was in power, about to enter the last decade of its more than 70— yes, 70—years in power. How did it last so long? There are many answers to that question but the main one relevant for our topic at hand is that the PRI attempted to bring everyone, whether farmers, campesinos, industrialists or intellectuals, and that would include poets and writers, under its own big tent. It had its ways. Stick and carrot— or bone, as Mexicans like to say.

You may be aware that after two consecutive presidential administrations under the PAN or the Partido Acción Nacional, over the past decade, Mexico's Presidency has since returned to the PRI. But it's not exactly a return to the past. Not exactly.

I'm not going to get all political on you, I simply want to underline the fact that back in early 1990s, the Mexican literary establishment, concentrated in Mexico City, was heavily influenced by and subsidized by the PRI government. Just to give you a notion of this: If you were to go into a library and look at some back issues of the leading Mexican literary and intellectual magazine of the time— of course that would be Octavio's Paz's Vuelta— you would see a large number of advertisements from government-owned entities and Televisa, the party-allied television conglomerate. There were literary gatekeepers, as there are everywhere in this world, but in Mexico City at that time, they were ginormously powerful. Octavio Paz was king.

Though Octavio Paz met his maker some years ago, in some ways things remain the same. Mexico City is where it's at. The government still plays an important, though lesser role. Letras Libres, successor to Vuelta, remains a leading magazine of influence, and in fact it does publish some of the best writing you'll find anywhere.

But since the early 1990s there have been political and economic sea-changes in Mexico. Power is more dispersed. Other political parties have become far more powerful. On the right and the left they rival the PRI and on many an occasion, beat the PRI at the ballot box.

And even more than the political and economic changes, the technological changes have been sea-changes. I'm talking about the rise of digital media, from blogging to YouTube, podcasting, Tweeting, FaceBooking, and publishing— and by the way, amazon is now in Mexico with www.amazon.com.mx.

To find a Mexican writer to translate, you no longer have to travel to Mexico City and get chummy with the powers that be who can make recommendations and, perhaps, invite the anointed to tea. Now, say, from Boston or Hong Kong or Cleveland, you can follow any given Mexican writer's blog, and comment thereupon. Or, say, send her a Tweet!

I would love to tell you the story of how, in the late 1990s, I started my bilingual magazine, Tameme, which published many Mexican writers, and my experiences with putting together the anthology, Mexico: A Traveler's Literary Companion— no easy task, since the idea of the TLC series is to provide writing about the whole country— and that would include writing from and about Baja California, Yucatan, Chiapas, Chihuahua...

At present I am translating a batch of Mexican writers: Ignacio Solares, a novelist born in Ciudad Juárez, long based in Mexico City; Agustín Cadena, who was born in the state of Hidalgo and is living in Hungary; Araceli Ardón who was born in San Miguel de Allende and lives in Querétaro; and yet another, Rose Mary Salum, who is from Mexico City and now based in Houston, Texas.

But I don't want to take time from my fellow panelists and what I hope will be a rich question and answer session. The main thing I want to emphasize is that, as literary translators, we can play a powerful role in influencing who and who is not read in English. Who to translate? It's good to ask for advice from the powers that be of the literary establishment in, say, Mexico or Cuba or Chile, and maybe even choose to translate one of them. They might be blast-your-wig-to-the-asteroid-belt fabulous! But we also have to recognize that there are power structures in literary communities, some of them entangled with political structures, and we need to acknowledge and examine, in our own minds, and our own hearts, what part we play in that or choose not to play. And why.

We may have been visiting the southwest this year, but ni modo, after the panel we ambled over to Sinbad's for Iraqi tea and babaganoushe.

Your comments are always welcome. Write to me here.

My review of Ilán Stavans Octavio Paz: A Meditation

My talk for ALTA 2014:
Why Translate? The Case of the President of Mexico's Secret Book

Translating Across the Border:
Transcript of C.M. Mayo's remarks for the panel on
"Translating the Other Side," ALTA, October 29, 2015.

Goodbye Mexico: Poems of Remembrance, edited by Sarah Cortez
(with my translation of a poem by Agustin Cadena)