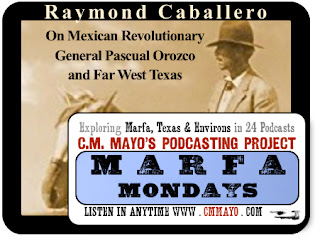 >> Listen in anytime on podomatic or on iTunes here<<

Raymond Caballero is the author of Lynching Pascual Orozco: Mexican Revolutionary Hero and Paradox, the first major biography in over 40 years of one of the most important figures of the Mexican Revolution. Caballero is also the ex-mayor of El Paso, Texas and, in his words "a recovering lawyer"-- a background that no doubt helped him unravel the conspiracy he found revealed in the one hundred year-old records of the Culberson County Courthouse, apparently intended to cover up what really happened to Pascual Orozco and his men in the High Lonesome Mountains south of Van Horn in 1915. Caballero's Lynching Pascual Orozco is an important contribution to the history of not only the Mexican Revolution, but of the state of Chihuahua and of Far West Texas.

Quote from the interview:

"There were a lot of Mexicans very upset over the killing of Pascual Orozco... it was a huge controversy... In El Paso, in San Antonio, in Mexico City even President Carranza was asking for explanations... they wanted an investigation. So what happened was, 'whoa! We didn't kill some ordinary horse thief, we killed General Pascual Orozco, the biggest military hero of the early part of the Revolution! And what happens if the Mexicans in El Paso are able to pressure officials and they start a grand jury investigation there?' As a result of the concern that they had, the sheriff of Culberson County did something very unusual..."

> Listen in anytime to all the Marfa Mondays Podcasts


Your comments are always welcome. Write to me here.

Greg Kaminsky interviews C.M. Mayo for Occult of Personality
about Francisco I. Madero and His Secret Book

Book review by C.M. Mayo:
The Pecan: A History of America's Native Nut by James McWilliams

"Translating Across the Border"
Transcript of My Talk for the American Literary Translators Association Panel,
"Translating the Other Side"

Marfa Mondays Podcast #13
Looking at Mexico in New Ways: An Interview with John Tutino
Posted by C.M. Mayo at 12:01 AM