>> READ THIS POST ON THE NEW PLATFORM AT WWW.MADAM-MAYO.COM


This is an excerpt from my long essay, of creative nonfiction, "Dispatch from the Sister Republic or, Papelito Habla," which  is forthcoming now available in Kindle.


...There is one more a pearl of a place that cannot go unmentioned in any discussion of our sister republic’s literary landscape.

From the Claustro de Sor Juana, in less than twenty minutes’ walk north and slightly east—weaving your way through the shoppers, touts, tourists, beggars, businessmen—honking cars and buses and motorbikes—and a skate-boarder or two—blaring music, freighters with their trolleys piled to toppling with boxes—don’t get run over by the pedicabs—and once at the Zócalo, wending around the Aztec dancers in feathers and ankle-rattles, the toothless shouter pumping his orange sign about SODOM Y GOMORRA MARIGUANA BODAS GAY, and an organ grinder, and to-ers and fro-ers of every age and size, you arrive, out of breath, at a squat, terracotta-colored three-story high building. This is where the first book was printed in—no, not just in Mexico—then New Spain—but in the Americas.
La Casa de la Primera Imprenta de América.
To step into the foyer of its museum and bookstore is to relax into an oasis of peace.
The uniformed guard hands me a pen to sign the guest book. It’s late afternoon; I am the third visitor for the day.
I take a gander at the exhibition of contemporary textile art—a few pieces reference one of Frida Kahlo’s drawings in the Casa Azul of a tentacled monster of paranoia, each limb tipped with a staring eye. 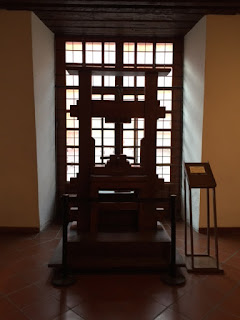 In the second gallery I find the replica of our continent’s first printing press soaking in sun from the window. The wooden contraption is taller than I am, but so spare, it occurs to me that it might serve to juice apples.
How my Mexican amigos scoffed at the auction of the Bay Psalm Book in 2013. Not about the record sum—14.2 million US dollars—for which that little book, printed in Cambridge, Massachusetts, in 1640, went to a private collector, but about the report in the international media that the Bay Psalm Book was “the first book printed in America.”
To Mexicans, America is the continent, not their sister republic. Mexico is part of the same continent, of course, and so the first book printed in America—or, as we estadounidenses prefer to say, the Americas—was Breve y más compendiosa doctrina Cristiana en lengua Mexicana y Castellana (Brief and Most Comprehensive Christian Doctrine in Nahuátl and Spanish), printed right here, in Mexico City, in this building, in 1539.
Mexico beats out Massachusetts by 101 years! But this sinks to silliness. That printer in Cambridge, Massachussetts, was English, and the one in colonial Mexico City, a native of Lombardy named Giovanni Paoli, Hispanicized to “Juan Pablos.” The technology that found its way to the Americas with these printing pioneers—to the north, Protestants, to the south, Catholics, separated by religious schism and the whirlwinds of European politics, and that century, and moreover, by the staggering distance of desert, swamplands, oceanic buffalo-filled prairies, and sunless and unmapped forests—had one and the same root: the fifteenth-century workshop of a German goldsmith by the name of Johannes Gutenberg.
Gutenberg was inking his little pieces of movable type more than half a century before Christopher Columbus “sailed the ocean blue,” and the indigenous on this continent chanced to hear the first stirrings of vaguest rumors and weird omens.
Still, 1539 is an early date indeed for that first book printed in the Americas: only eighteen years after the fall of Tenochitlán. Three years after Cabeza de Vaca’s miraculous arrival in Mexico City. Fray Sahagún was still a year away from launching the research that would result in the Historia general de las cosas de la Nueva España, or the Florentine Codex. The lodes that would turn Mexico into an industrial-scale silver exporter had not yet been discovered. The Manila Galleons, treasure ships bringing porcelain, spices, and silks from China to Acapulco, would not begin their annual crossings for another twenty-six years.
In England, Henry the VIII was between wives three and four. It would be sixty-eight more years until the first, disastrous English settlement at Jamestown. The Pilgrims who would land at Plymouth Rock? As a religious community they did not yet exist.
Tucked in the shade of the National Palace and a block east from Mexico’s cathedral, the Casa de la Primera Imprenta was built, it turns out, over the ruin of the Aztec Temple of Tezcatlipoca, Smoking Mirror, trickster god of the night sky, of time, and of ancestral memory.

Who knows what still lies beneath in the rubble? Dug up in the eighteenth century during a renovation, a gigantic Aztec stone snake head was, no doubt with a shudder of horror, reburied. But we live in a different time with a very different sensibility. In 1989 when renovations unearthed that same Aztec stone snake head—elegant with fangs, nostrils, scales, eyes the size of melons—it was carefully excavated and cleaned by archaeologists. This monumental sculpture, heritage of the nation, is now displayed atop a roped platform in the Casa de la Primera Imprenta’s Juan Pablos bookstore, surrounded by a shelf of fiction, a table of poetry, and a sign informing us that the Aztec snake head is carved from grey basalt and weighs approximately one and a half tons.
The Juan Pablos bookstore, named for that original printer Giovanni Paoli, retails books from the press of Mexico City’s Universidad Autónomo Metropolitana (UAM). Such are my interests du jour: I came away with a copy of the first Spanish translation of an eighteenth-century Italian’s journey to Mexico and the 2015 El territorio y sus representaciones.


When the Kindle is available I will be sure to announce it here. If you'd like to get my very occasional newsletter, I welcome you to sign up for that here.

> Another excerpt from this same long essay, on Cabeza de Vaca's Relación, is forthcoming in Scoundrel Time; another, on Mexico's great baroque poet, Sor Juana, appeared in this blog Monday before last; and yet another, on Lord Kingsborough's colossal Antiquities of Mexico, was posted back in February.

UPDATE: "Dispatch from the Sister Republic or, Papelito Habla," my long essay pon the Mexican literary landscape and the power of the book, is now available in Kindle.

What the Muse Sent Me About the Tenth Muse,
Sor Juana Ines de la Cruz