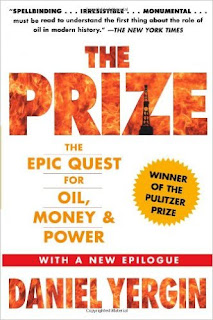 Finally I finished reading Daniel Yergin's brilliant and necessary The Prize: The Epic Quest for Oil, Money and Power, a doorstopper of a tome which deservedly won the Pulitzer Prize back in 1992. I sincerely wish I had read it decades sooner. It rewired my thinking about World War II, among multitudinous other things. What prompted me to pick it up is that for the book I am writing about Far West Texas I needed a broader historical perspective for the oil industry in the Permian Basin. One oilman mentioned in The Prize whom I'll be writing about is pioneer geologist and philanthropist Wallace E. Pratt... More about him anon.

Next on my reading list: Mason Inman's new book about M. King Hubbert, The Oracle of Oil: A Maverick Geologist's Quest for a Sustainable Future

> A lengthy and fascinating memorial to M. King Hubbert in The Geological Society of America (PDF).

Oil Extraction, Economic Growth, and Oil Price Dynamics
An academic article that represents a parting of the seas.

Bob Dylan's Nobel Lecture
Strange and powerful, a highly recommended read. (But I still think I must have stepped into some parallel universe, this one where Donald Tump is President and Bob Dylan won the Nobel Prize.... I am not comparing Dylan to Trump, however. And, apropos of that lecture, I will say that I'm a serious fan of Buddy Holly.)

On Jeffrey Mishlove's "New Thinking Allowed":
Psychedelic Experience with Stanley Krippner
I am not planning on seeking out any psychedelic experiences myself; current events seem plenty psychedelic to me. But I do find it fascinating to listen to other people's experiences and to learn some of the cultural history. For psychonauterie and psychedelia, the very articulate and matter-of-fact Professor Krippner is the elder guru.


Who Says 19th Century Family Photo Albums are Boring?
Check out this post on the blog of Jeff Peachy, blogging book conservator extraordinaire.

Guaranteed Minimum What?
Another thoughtful post from Granola Shotgun.

And finally, a couple of especially interesting pieces both in the New York Times:


The Hidden Radicalism of Southern Food by John T. Edge

Is there an ecological unconscious? by Daniel B. Smith

Peyote and the Perfect You

Jeffrey Mishlove's Thinking Allowed
Interview with Yours Truly about Francisco I. Madero and
Spiritism in the Mexican Revolution
Posted by C.M. Mayo at 12:01 AM