At the Corcoran: Princess Marie d'Orleans' Joan of Arc in Prayer 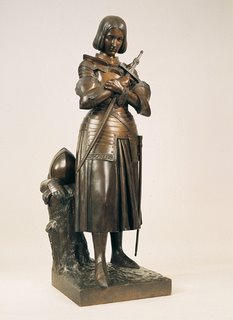 Working on a chapter of my novel set in Paris 1866, which includes a section from the point of view of Carlota, Empress of Mexico, I felt drawn--- not sure why--- to go see the Joan of Arc exhibit at Washington DC's Corcoran. So that was this afternoon. It's a fascinating exhibit that features some truly extraordinary illustrations from the late 19th century. What arrested me, however, was the bronze statue after the marble by Princess Marie d'Orleans (1813-1839), an amateur sculptor who was the daughter of France's King Louis-Philippe-- and aunt of Carlota, Empress of Mexico. (Carlota's mother was Princess Louise, daughter of King Louis-Philippe.) Here's the accompanying text:

"Princess Marie d'Orleans, the second daughter of King Louis-Philippe, was a gifted amateur artist with a passion for medieval art and culture. After a life-size marble copy of her Joan of Arc in Prayer was installed at Versailles in 1837, the princess's sculpture became one of the most popular and widely emulated images of Joan ever made. In the mid-19th century, Joan of Arc in Prayer was replicated and could be found in varying sizes and materials in churches, museums, public squares, and private collections throughout France. Joan of Arc in Prayer is one of the first historical treatments in sculpture of the Maid's appearance. Joan appears here with a short, boyish haircut, wearing late medieval armor, including a cuirass (joined back and breastplates), condieres (elbow guards with shell-like flanges) and in full-scale reproduction, a bascinet (an open-faced helmet) resting with a pair of gauntlets on a tree stump."

The exhibit continues through January 21st 2007. Click here for the Corcoran Gallery's press release on the exhition.
Posted by C.M. Mayo at 9:10 PM