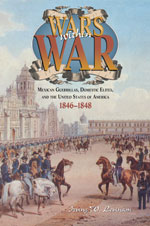 A most fascinating and original book I've been meaning to write a proper review of: Irving W. Levinson's Wars within War: Mexican Guerrillas, Domestic Elites, and the United States of America (TCU Press, 2005). From the jacket text: "Traditional characterizations of the 1846-1848 war between the United States and Mexico emphasize the conventional battles waged between two sovereign nations. However... [this work] examines two little-known guerrilla wars that took place at the same time and that proved critical to the outcome of the conflict. Utilizing information gleaned from twenty-four archives, including the normally closed files of Mexico's National Defense Archives, Wars With War breaks new ground by arguing that these other conflicts proved crucial to the course of events." My current research, for a novel about Maximilian, among other characters, focuses on the French intervention of the 1860s-- and the French, as one might imagine, faced similar issues. What I found especially interesting was the difficulty the U.S. Army had in securing the Veracruz to Mexico City corridor--- very similar to difficulties the French faced. (Shades of Iraq's highway from the airport into Baghdad.) The neighorborhood of Rio Frio, a stagecoach stop on the highway in the mountains between Puebla and Mexico City, was long and famously infested with bandits. I recently posted a note about the new translation of Manuel Payno's classic The Bandits from Rio Frio here.
Posted by C.M. Mayo at 6:41 PM