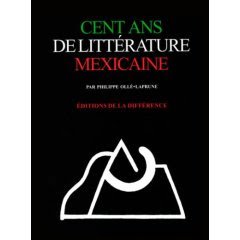 A very interesting meeting yesterday at the Fundacion para las Letras Mexicanas where I met several of their young writers in residence-- some from as far away as Chiapas. And I was given a copy of the massive (really, it weighs as much as a brick) new French anthology, Cent Ans de Litterature Mexicaine, edited by Philippe Olle-Laprune. I was delighted to see that it includes many of the writers and poets I've either translated or published in Tameme or included in my own anthology, Mexico: A Traveler's Literary Companion: Carlos Fuentes, Jaime Sabines, Fernando del Paso, Ines Arredondo, Julieta Campos, Carlos Monsivais, Rosario Castellanos, Gabriel Zaid, Alvaro Mutis, Juan Villoro, Daniel Sada, Fabio Morabito, Alberto Ruy Sanchez, Jesus Gardea, Guillermo Samperio, Elsa Cross, Coral Bracho, and Eduardo Hurtado. But there are many, many more to discover. More anon.
Posted by C.M. Mayo at 2:33 PM