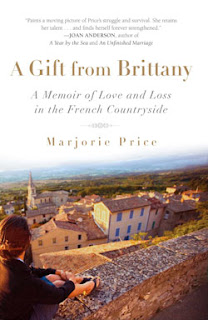 Many writers dream of making beautiful paintings, and many painters dream of becoming writers, but few manage both. Marjorie Price, author of A Gift from Brittany, a memoir of painting and making a life in a remote corner of France, is one of those rare artists. Her Bathers Series paintings will open on April 3 at the Delaplaine Visual Arts Education Center in Frederick, MD and will continue through April 24. So where does she get her inspiration? In part from other artists. Here's what she has to say about some of them:

I believe we’re all a part of a slice of history. Some of us are minimally touched by it; some of us are shattered by it; and some of us weave it into our work. My memoir, A Gift from Brittany, focuses on a time in my life when I went to France to paint and lived in an isolated village in Brittany during the 1960’s. It was not long after World War II. Outwardly the country people’s lives seemed sheltered from world events (television was unheard of, most of the villagers had no radio, and many couldn’t read or write), yet all had been deeply affected by the German occupation, by men being taken away as prisoners-of-war, by collaborators in their midst, and by the violence and turmoil of the times. Since I had come from the suburbs of Chicago, the traumas of World War II were remote to me. Suddenly they came to life.

What influences my choice of these five women artists is how history affected their artistic expression. While the authors are writers of fiction, not memoirs, their life experiences are the heartbeat of their books. (I also included one painter.)

1. Isabel Allende
The political events of 1973 in Chile had an enormous impact on Isabel Allende. Her uncle, Salvator Allende, the elected Marxist president of Chile, was assassinated by a military coup, supported by the U. S. government and the CIA. The tragedy devastated the Allende family and the entire country, especially since a repressive dictatorship replaced him. The connection between political upheaval and personal lives is crucial to her first novel, the haunting House of the Spirits, one of the most memorable books I’ve ever read. Assimilating dramatic events and transforming them leads Allende into the mesmerizing world of magic realism. Mystical characters become real and unforgettable. In a fascinating interview on her website, she writes:

“… life is full of mystery. And the goal of literature is to explore those mysteries. It actually enlarges your horizons. When you allow dreams, visions and premonitions to enter into your everyday life and your work as a writer, reality seems to expand.”

2. Sidonie-Gabrielle Collette
Any page I turn to in Colette’s irresistible Retreat from Love is a delight. In spite of life’s trials, her characters exude a very French joie de vivre — and in this way, they reflect her own life. She had three marriages and many liaisons; she took dangerous risks during the German occupation to aid her Jewish friends and hid her Jewish husband in her attic during the entire occupation; she lived life to the fullest and infused her writing with her fearlessness and sensuality. She wrote fifty novels, although her first husband published her early writings under his name. Retreat from Love was the first book she was "allowed" to sign with her own name. How familiar this sounded to me since my French painter husband ordered me to stop painting and not even to mention that I had been a painter. The day I left him, I brought my paints out into the open. How well I understand what it’s like to assert oneself as a woman and as an artist.

3. Irène Némirovski
Prior to World War II, Némirovski had been a best selling author in Paris. When the Germans occupied France, she was sent to an extermination camp. Somehow she managed to write her marvelous book, Suite Française, clandestinely and by hand before she was killed. The manuscript was salvaged, but her two daughters, who had survived the holocaust, were too traumatized by losing both their parents to read it. Forty years later, one of the daughters found the courage, took it to a publisher, and the book became a best selling phenomenon in France. The book takes place during the German occupation in France, but is not about Némirovski's personal plight. It is France's plight and becomes universal. Having lived in France not long after the war, I found the situations and characters so gracefully and accurately drawn that I couldn’t put it down. Now, Némirovski is again an acclaimed author. Amazing. But I can’t help wondering how many gifted artists were lost during those terrible years, and whose work will never see the light.

4. Toni Morrison
Growing up during the thirties and forties in America, it must have been hard for a black woman to imagine herself an acclaimed woman of letters. Morrison was undaunted. An avid reader, she loved the folktales of the black community her father used to tell her. She won honors, attended college and began writing early in her career. Along the way, she invented a new and thrilling way of expressing the English Language. Reading her prose, you hear her sonorous voice, sounding like a mixture of song, poetry, negro spiritual and Greek chorus. Her books need to be read aloud. Her stories are like fables, but are based historical facts — the kind of expanded reality Allende describes in her interview. Morrison's book, Beloved is a heartbreaking story of slavery and the tragedies it imposes on its victims. Out of this suffering comes a language that soars and moans and sings.

5. Joan Mitchell
Finally, since I am both a writer and a painter, I can't resist including a painter whose work and life I have admired for years. In the 1960’s, Joan Mitchell was among a group of New York abstract expressionists, which mostly consisted of macho, hard-drinking men. New York was the center of the Art World; it was where "art history was being made.” But Mitchell had enough of the New York scene. She abandoned everything, moved to France and set up shop in an isolated farmhouse in the French countryside. Without distractions, her work gained an intensity that, in my opinion, took it to a level that the other painters of the group never attained. Sealed off from the rest of the world, she, too, reached a state of “expanded reality.” During her lifetime she never achieved the success of Franz Kline, de Kooning, Jackson Pollock or the others. Perhaps it was necessary to seal herself off from the world, to experience isolation, loneliness and a closeness to nature that would have been impossible in the big city in order to create an intensely personal body of work. I know of no other painter who captures the essence of nature to the extent of Joan Mitchell's art.