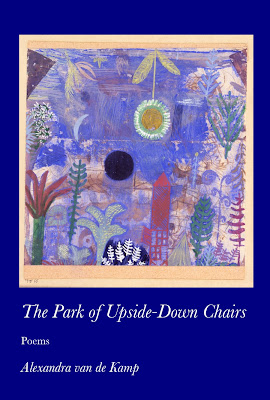 Along my journey of editing Tameme, one of the most delightful and talented people I had the priviledge meeting was Alexandra van de Kamp, a fellow translator, editor (of the bilingual journal Terra Incognita) and a very accomplished poet. Her new collection is just out from CW Books, and -- DC poets take note-- she'll be reading in the prestigious Café Muse series later this year. Over to you, Alexandra!

My recently published book of poems, The Park of Upside-Down Chairs evolved over a 10-year period in my life. In this period, I lived abroad (in Spain)— traveling, at times, to other European cities— and then moved back to the States to live in New York City for five years. One constant in these geographical shifts was my love of museums, as places both in themselves and as gateways into the other “places” and “worlds” provided by their displayed pieces of artwork. I love the hushed, contemplative, almost monastic atmosphere of most museums—the cutting-off from your regular life-routine that they can provide. After all, museum comes from the Greek word mouseion, which means “place for muses or for study”. In a museum, I feel I am given more permission than usual to just be quiet and look at what is around me, and that quiet has inspired many a poem. I love to simply plant myself in front of a sculpture or a painting and lose myself in the textures, colors, perspectives and unanswered questions it conjures up. Needless to say, I often make such pilgrimages alone— just ask anyone who has gone to a museum with me and they will testify to how long I can stand before one captivating piece of artwork. Of course, a museum need not always be a place with four walls and dim lighting. Certain locales have played a similar role in my life—as places which provided an unworried enough pace of life so that looking and observing came to the forefront. Thus, one of my links below is not a traditional museum but a village that I lived in for one year— Chinchón, Spain.

1. Museo Thyssen-Bornemisza
Madrid is famous for a triangle of museums that exist at the bottom end of The Castellana— the wide avenue that cuts through the city and flaunts most of Madrid’s major banks and businesses. The Prado is one of these three museums as well as the Reina Sofia—famous for Picasso’s Guernica. However, the third museum that completes this triangle is no less delightful. This is the Thyssen-Bornemisza. With art spanning from the 13th to the 20th century and a modern, well-lit interior, I found myself visiting it quite often. In fact, this museum was where I first began to write ekphrastic poetry—poetry about other works of art. In the mid-1990’s, the museum featured a temporary exhibit on “The Golden Age of Dutch Landscapes,” and, out of my experience with this exhibition, came a whole section of my book, “Winter Landscape.”

2. Zwinger Palace, Dresden, Germany
This is a complex of galleries that gracefully occupies different arms of an extensive, Baroque palace. I discovered this museum when visiting a friend teaching English in Prague. She suggested, as an ideal day trip, taking the beautiful three-hour train ride along the Elbe River to Dresden. Once in Dresden, I found myself spending most of the day in this palace, stumbling from gallery to gallery. My favorite was The Porcelain Gallery, which displayed the most delicate figurines and vases, each a world in miniature: clasping lovers, musicians playing their flutes, scribes hard at work, bent over shining tables.

3. The Frick Museum: New York, NY
Located on East 70th Street right across from Central Park, this private collection was the actual home of the industrialist and art collector, Henry Clay Frick, and was built in the early 1900’s. I find this museum a refreshing alternative to the more sprawling Metropolitan, fifteen blocks uptown. It exudes an intimacy rarely found in a museum with exquisitely furnished rooms, painted ceilings, a quiet courtyard and then, of course, the paintings!!! There are works by Bellini, El Greco, Vermeer and Pieter Bruegel the Elder, to name just a few.

4. The Metropolitan Museum, New York, NY
Living in New York for five years gave me the luxury of being able to return to the Metropolitan Museum over and over again. As a result, I was able to explore, in a more relaxed manner, the various galleries and corridors. I would find myself, on one visit, mesmerized by a gilded pair of leather shoes (A.D. 300-700)— survivors of the Byzantine Empire— and, on a next visit, fascinated by a charcoal study by Degas, depicting a lone dancer.

5. Museum Folkwang Essen, Germany
This is the only museum I have not yet physically visited— although I feel I’ve been there in spirit! Through the generous help of its staff, I was able to get access to a digital image of the 1918 Paul Klee painting, Sunken Garden, that eventually became the image featured on the cover of my poetry book. Such a positive experience with this museum made me curious about it. The first museum of contemporary art in Europe, Museum Folkwang (opened in 1902) is now one of the best known museums of the classical modern era. It can boast paintings by such artists as Gaugin, Manet, Cézanne, van Gogh, Renoir and Klee.


6. Chinchón, Spain
A Castilian village 45 minutes outside of Madrid (if you don’t mind some rather hilly, swerving roads to drive along), Chinchón is a rugged yet elegant village, with a run-down castle propped up on its hill, winding roads, and vineyards dotting its fields. Situated on the wide open terrain of Castile, it has an untouched quality to it that helps you forget you are so near Madrid! My husband and I had the pleasure (and adventure!!) of living there for one year and even managed to get married in its 16th-century church, La Nuestra Señora de la Asunción (a Goya painting hangs above its altar). Its plaza doubles as a bullring in summer, and it can flaunt several impressive restaurants, which serve delicious food and, of course, the famed Anis de Chinchón, a sweet liquor made from Anise seeds and licorice and manufactured in the factory outside of town. Several types of anis are available only in this area of Spain. One is them is Anis Seco (“dry” anis). A little less sweet and more potent than regular anis, there is nothing quite like a snifter of that on a cold day!

P.S. Here's a link to a video of Alexandra reading three poems from her previous collection, back in 2006.
Posted by C.M. Mayo at 8:00 AM