Mary Lutyens: To Be Young 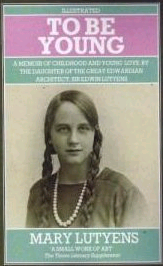 Rarely have I read anything so exquisite that has also made me laugh out loud so many times as Mary Lutyens' memoir, To Be Young. Alas, I have to agree with the author that her editor was quite wrong; the better title would have been From Maryb to Mushe (read it to find out why; this scrap of a blog post couldn't begin to explain). I read it as part of my research, very round about, for writing the prologue to my translation of Francisco I. Madero's Spiritist Manual. The connection: a bit tenuous, but Madero's Spiritist Manual was published in 1911, the very same year that Theosophist Annie Besant brought Jiddu Krishnamurti to England, placing him under the wing of Mary Lutyens' mother, Lady Emily Lutyens, an ardent Theosophist. Theosophy and Spiritism and Spiritualism (note the "u" in the latter) are similar in many respects but differ on important points. Anyway, Mary Lutyen's memoir is so delicious, I know I'll be quoting from it in my writing workshops, for it would be difficult to imagine more effective use of telling detail.

On her grandmother, who had been the Vicereine of India:

When the Rector came to lunch on Sundays, the book of memoirs (her favorite reading) would be put out of sight and a religious work substituted. She already seemed to belong to history. She pronounced cucumber, cowcumber; laundry, larndry; soot, sut; and blouse and vase, bloose and vaize. She sent her hair-combings to Paris to be made up into curls which her maid pinned to the front of her head.

On her aunt Con, who had been a militant suffragette:

I was frightened enough of her when she was shuffling about downstairs doing exquisite Japanese flower decorations with her left hand (it was her right side which was paralyzed), but very much worse was when we had to visit her, each in turn, in her very hot bedroom where she lay in bed peeling grapes for her Pekingese. She always wore purple velvet, even in bed, with her suffragette medals pinned to her chest, and she had flannel sheets which made the room feel horribly stuffy; but more dreadful than anything, she expected me to sit on a chair and converse with her... I have since discovered what a wonderful person she was, and one of my deepest regrets is that I failed to value her.

On the notorious Mr Leadbeater, aka Bishop, aka Brother:

Bishop had the merriest of twinkling blue eyes, a jolly manner and a very loud though pleasant voice. I was immediately impressed by his air of sparkling health, as if every faculty, mental and physical, was kept in perfect working order for immediate use. His teeth, although very white and apparently without decay, and certainly his own, were exceptionally long and pointed (all his visible teeth were like that, not just his eye teeth) so that the word vampire jumped to my mind. Under his cloak he wore a red cassock with a large amethyst cross dangling at the breast, and on the third finger of his right hand a huge amethyst ring. The impact of his personality was like a plunge into cold water.

Her portrait of Krishnamurti, the Theosophists' designated Messiah, is equally compelling, and strange: strange indeed to read of the "Messiah" as a teenager discovering P.G. Wodehouse.

Mary Lutyens also wrote several novels, and biographies of her father, the renowned architect Sir Edward Lutyens, and, in three volumes, Krishnamurti. She died in 1999; read her fascinating obituary here.