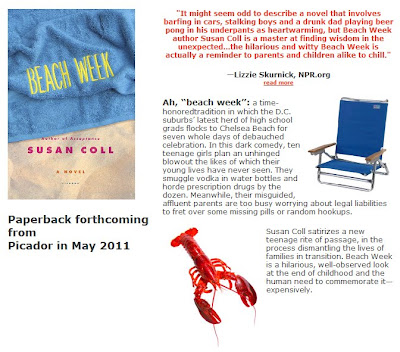 The best novelists are sociologists with a wicked sense of humor. In her widely celebrated novels Beach Week, Acceptance, and Rockville Pike, my amiga Susan Coll has upward-striving suburbia nailed. This month Picador has released the paperback edition of Beach Week, so click on through and get your chuckles. Here's what this master of the genre has to say about some of her own comic reading. Over to you, Susan.

Now there is a pig in this world named “Super Sad True Love Story,” the thought of which is nearly as funny as Gary Shteyngart’s self-same novel, winner of this year’s Bollinger Everyman Wodehouse Prize for Comic Fiction. It’s encouraging to see an American--even one who came by way of Russia--win this award, which usually goes to a Brit. A few pages into Super Sad it occured to me that this book does have something of a British sensibility in that Shteyngart's humor relies on the mortification of his male protagonist. This got me thinking about my favorite comic novels--or at least books that had me doubled over in laughter, and I have to confess that the British do seem to have a lock on the sort of droll, dark humor that typically does me in. As do, apparently, men--which is at least the sort of observation that helps get me out of bed and to my keyboard each morning.

1. Our Man in Havana, By Graham Greene (1958), in which a cash-strapped vacuum cleaner salesman in Cuba is pressed into service by British intelligence to hilarious effect, and which, I only just learned from Wikipedia, was made into not just a film but an opera and a play.

2. Burmese Days, by George Orwell (1934), which you can read free, on-line, and which amazon describes as a mix of E.M. Forster and Jane Austen. “Stir in a bit of socialist doctrine, a sprig of satire, strong Indian curry, and a couple quarts of good English gin and you get something close to the flavor . . .”

3. A Good Man in Africa, by William Boyd (1982), about a hapless British diplomat in a fictitious African country in the fledgling days of independence. I wrote about this last summer for NPR: http://www.npr.org/templates/story/story.php?storyId=126501855

4. The Wimbledon Poisoner, by Nigel Williams (1994), a suburban comedy about a man who tries to murder his wife. Confession: I read this so long ago that really all I remember is my own hysterical laughter. While I can’t vouch for how well it holds up, I can tell you who borrowed my book and failed to give it back, so perhaps you can consult with him.

5. Memories of the Ford Administration, by John Updike (1992). Odd that Updike, not known for his comedy, should be the token American on my list. I worked up the nerve to approach him at a conference many years ago, and told him how much I loved this novel. He seemed surprised, and said something about having almost forgotten writing it. I later told this to a book critic who scoffed and said, “minor Updike.” Minor Updike! The definition of an oxymoron? Or the fate, too often, of comic fiction?