Growing up in the United States, I never once, that I can recall, heard of Sor Juana. But once in Mexico—- I arrived some 25 years ago-- I found her to be ubiquitious, literally. She's on the 200 peso bill right now. You cannot visit a bookstore in Mexico without finding something by or about her. Back before Mexico was Mexico, that is, when it was still a Spanish colony, Sor Juana, which means "Sister Juana," was a nun and a literary prodigy taken under wing by the vicereine, and given a provocatively promininent place in court. One might imagine how this went over with the grimly-bearded Church fathers who were, now and again, busying themselves with burning people at the stake. Once the vicereine returned to Spain, things did not go swimmingly for Sor Juana. Hers was one of the great intellectual tragedies not only of Mexico but, one could argue, of humanity. 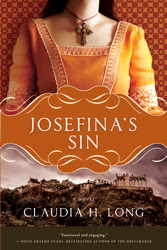 Josefina's Sin, by Claudia H. Long, is a story of love, poetry and the Inquisition. A sheltered land-owner's wife goes to the vice-royal court in colonial Mexico, in 1687, and meets the famous poet, Sor Juana Ines de la Cruz. Sor Juana teaches Josefina about the terrors and joys of writing, loving, and living life to the fullest, under the cruel and watchful eye of the Holy Office.

Claudia grew up in Mexico City, and lives in California. Her book has received critical acclaim and can be bought at bookstores, and the usual on-line sources, including Amazon.

As an historical novelist myself (The Last Prince of the Mexican Empire, set in the 19th century), I can well imagine some of the struggles Claudia must have faced in getting the details just right. And because, in Mexico anyway, Sor Juana is such a major figure, anything inauthentic, ayyyy ... No doubt every historical novelist loses sleep over this (I know I did).

When I was writing Josefina's Sin, which takes place in Mexico from 1687 to 1690, I thought feeding one's literary characters would be a simple task, but that's far from the case! Did you know that rice did not originate in Mexico? It was brought during colonial times. Sometimes, what seems so "typically" Mexican is really an import.

Josefina goes on a picnic with the ladies from the court. A tree with large, dark green, glossy leaves and hanging green fruit provided shade. Ah, a mango tree, I thought. Not so fast, said the editor at Simon & Schuster. Mangoes weren't introduced into Mexico until 1775! My mistake—- it was a papaya tree!

It's not hard to find out what food was available to the indigenous people of Mexico before the European colonization:
www.foodtimeline.org/foodmaya.html

And it's not hard to figure out which foods were ultimately imported to Mexico:
www.backyardnature.net/m/food/foodhist.htm

But it's really a question of "When?" What did they have? And what could they have had? If the first mention of mangoes was in 1775, they could well have had them in 1750, but there wouldn't be a mature tree sitting conveniently near my ladies in 1687!

Once I had the ingredients, I had to prepare them. Some of our favorite Mexican foods are easy to make, and were likely done the same way.

Take "agua de jamaica," or hibiscus tea. Jamaica flowers originated in Africa, and came to Mexico during the colonial era. The refreshing tea became popular for its great taste and medicinal value.

One ingredient we know with certainty was native to Mexico: Chocolate—- amazing, wonderful, and powerful.

In 1519, when the first Spanish conquistadors entered the Aztec capital Tenochtitlan, where today Mexico City stands, they found chocolate. Today, we may sweeten it with sugar (sugar cane came later. . .) but we enjoy it as much as Josefina did.

And now, back to our papaya. Papaya is native from Southern Mexico through the Andes of South America. We love it cut up, sprinkled with lime. But some things have definitely changed since Josefina's day. Enjoy this entertaining suggestion for preparation of a papaya for modern times:
www.mexconnect.com/articles/1055-magnificent-mexican-papaya

"First, you need to soak the outside of the papaya for 20 minutes in water with "microdine" iodine drops to kills any latent bacteria." I know Josefina never did that!