Three Messages and a Warning: Contemporary Mexican Short Stories of the Fantastic 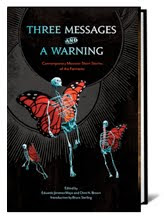 Just in time for Halloween or, I should say, Day of the Dead:

So very delighted to see this: the new anthology edited by Eduardo Jiménez Mayo and Chris N. Brown, which includes my translation of Agustín Cadena's masterful short story, "Murillo Park," just got this review in Publisher's Weekly:

By turns creepy, self-consciously literary, and engagingly inventive, these 34 stories selected by translator-scholar Jiménez Mayo and writer-critic Brown offer some excellent and ghastly surprises. Entanglements with characters who aren’t entirely human and may well be dead provide one intriguing theme; in Agustín Cadena’s “Murillo Park” a middle-aged narrator befriends a strangely anachronistic older widow who goes by Jorge outside his office on his lunch hour, but recognizes to his sorrow that she belongs to a lost world of vanished clubs and hotels. . . . Several of the tales envision a marvelously collapsed dystopia where anarchy and violence reign such as in Liliana V. Blum’s “Pink Lemonade,” where a “Somalization” of the world leaves the survivors fighting each other for food. “Wittgenstein’s Umbrella” by Óscar de la Borbolla cleverly supposes the death of the second-person narrator, while Pepe Rojo’s “The President Without Organs” is a grisly sendup of the national preoccupation with the president’s physical health. These are punchy, ghoulish selections by south-of-the-border writers unafraid of the dark. (Dec.)

>An interview with Cadena apropos of my translation of his short story, "An Avocado from Michoacán"

>More of my translations, including Mexico: A Traveler's Literary Companion, which includes Cadena's haunting short story, "Lady of the Sea" and Eduardo Jiménez Mayo's translation of Bruno Estañol's "Fata Morgana."