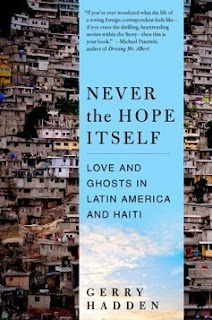 Gerry Hadden is the author of a book just out from HarperCollins that, as a long-time resident of Mexico City-- the very navel of the Americas, IMHO-- I am especially anxious to read: Never the Hope Itself. It's been garnering rave reviews, including from Publisher's Weekly, which calls it, "Offbeat, gripping....It's the rare journalist who shows such a mystical bent, but Hadden's quirks and openness give his book a rare charm."

A former NPR correspondent takes you into his own ghost-filled life as he reports on a region in turmoil. Gerry Hadden was training to become a Buddhist monk when opportunity came knocking: the offer of a dream job as NPR’s correspondent for Latin America. Arriving in Mexico in 2000 during the nation’s first democratic transition of power, he witnesses both hope and uncertainty. But after 9/11, he finds himself documenting overlooked yet extraordinary events in a forgotten political landscape. As he reports on Colombia’s drug wars, Guatemala’s deleterious emigration, and Haiti’s bloody rebellion, Hadden must also make a home for himself in Mexico City, coming to terms with its ghosts and chasing down the love of his life, in a riveting narrative that reveals the human heart at the center of international affairs.
+ + +

1. The shaded stream that circumvents a Garifuna village near Punta Gorda, Belize.
I was floating in it with a young Garifuna known as “the Jamaican” among the drug dealers in Queens. He was back in the village, trying to start over. He had seven bullet scars. “Look,” he said. I turned my head. Inches from my nose began an endless floating field of tiny white flowers, stretching upstream. I don’t know how they all ended up in the water. They moved passed us like silent boats, tickling our necks.
-->Learn to speak Garifuna.

2. The forest brothel along another river, Veracruz state, Mexico.
Sitting in the open shack, under Christmas lights strung in trees, talking to the girls, waiting for my interviewee. A mean guy showed up first, put a knife and a bottle on the table, made me drink with him. The sugarcane worker I was waiting for arrived. “Leave the Gringo alone,” he said. The mean guy stood, smashed his bottle and pointed it at me. I ran like hell. Then I turned back. I didn’t want to leave my contact behind. But when I reached the brothel all the lights were out, the music turned off. I ran again.
-->Hear some music from Veracruz(search Graciana Silva).

3. A ridge in the sierra outside San Cristobal de las Casas, Chiapas, Mexico.
A shaman showing me his garden: plants to staunch bleeding, to help with birthing, to cure the chills or the fear of walking alone in the dark. The view looked West down a sloping valley crisscrossed with hills fading one into the next. Foreigners were coming to steal the shaman’s medicinal secrets. I never wanted to leave.
-->Take a canoe ride through Chiapan culture.

4. A field behind a voodoo temple, Western Haiti.
They were holding the ceremony so that Jean Bertrande Aristide would win the presidency and be a good leader. That was a lot to ask. A bonfire burned. Women circled it dressed in white and blue, singing something beautiful. We men formed an inner circle. The priest danced close to the fire and then let a goat have it with a machete. The rest is history.
-->See some of the best photos of Haiti.

5. A wooden meditation hut in the highland rainforest outside Xalapa, Veracruz.
I’d complained to the Buddhist monastery’s abbey that I couldn’t concentrate. The constant traveling had my mind racing. But after a week of solitude I began to feel grounded again. Upon returning to Mexico City that peace evaporated quickly. Okay, this last place you can find.
-->Here’s the link (in Spanish only).

Guest-blogs on travel in Mexico include David Lida on 5 secrets of Mexico City; Nicholas Gilman on 5 funky foods in Mexico City and where to find them; Stephanie Elizondo Griest on 5 glimpses into the Mexican underworld; and Isabella Tree on 5 favorite books about Mexico.
Posted by C.M. Mayo at 1:45 PM