The Marfa, Texas Chamber of Commerce: Why I Joined 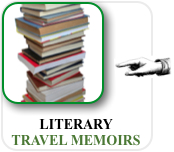 Well, it's not 1996. That's when I started writing Miraculous Air, my travel memoir of Mexico's nearly 1,000 mile-long Baja California peninsula, which was originally published by the University of Utah Press in 2002 (now a Milkweed Editions paperback). I was traveling and writing in the Anglo-American tradition of Robert Byron (The Road to Oxiana),  Frances Calderon de la Barca (Life in Mexico),  Ian Frazier (Great Plains), Sara Mansfield Taber (In Patagonia), V.S. Naipaul (A Turn in the South; Among the Believers), and -- though with a sight more depth into the actual nature, history and culture of Mexico and Baja California -- John Steinbeck's The Log from the Sea of Cortez (lovely book, but it mainly takes place in his head whilst observing the shoreline from the boat). I mean to say, I was writing a good old-fashioned literary travel memoir, passing through that blissfully cellphone and Internet-free territory within my shell of anonymity or, at least, the expectation that many of the people I encountered would never know much about me nor that they would appear in my book. Some of the people I talked to were not too familiar with books of any sort, and many others, even though I plainly told them what I was doing, could not fathom the nature of a literary travel memoir (no, I do not list and update the prices of hotel rooms!!). Where matters seemed to me especially sensitive, to protect them, I changed their names and some identifying details (and said so). Several of the people I interviewed then have since passed away and, as far as I know, they never had an email address.

But 2012? Different game. I mean, like, can we even have a convrstn w/o texting? "Friends" are snapping pix of their kids, their dogs, their cats, their dogs with their cats, their cats with their kids, and  by the way, the peanut-butter sandwich they ate on Tuesday, and post them all on Facebook. The other day, someone posted a picture of a blenderful of carrots he was about to zap and that peeved me enough to actually, like, lift a finger, and "defriend" him. (Why am I on FB anyway? Sandra Gulland, my amiga the crackerjack historical novelist and Internet book PR expert--check out her excellent podcast-- is why. SANDRA IT IS ALL YOUR FAULT.)

With all this texting and facebooking, does anyone have two minutes to read literary travel memoirs? Well, that isn't going to stop me from writing one (the aim of art, in my view, is to lead, not follow, the market). But with the explosion of digital communication and social media, the experience of traveling for writing is now a kind of ever-possibly public Orphic Journey. (How's that for an oxymoron?)

Give your name to almost anyone anywhere and chances are (if they are curious and/or have nothing better to do), they'll google you. So it's handy to have a website that offers what you'd like them to see, as opposed to, say, what Creepy Weirdo spewed on some obscure discussion forum.

But not only is the writer with a website (and what writer doesn't have a website?) more potentially visible now, so are the subjects of the writing themselves. Just for example, and to state the obvious, perhaps, even the tiniest B & B or cottage for rent by owner, even the eensy weensy of the weensiest sandwich shops, all have websites and Facebook pages, and many maintain twitter feeds. (Check out the fabulous Food Shark food truck, y'all.)

When I was traveling in Baja California back in the late 90s, many villages had only just-- literally a month or so ago-- gotten their first telephone. The larger towns, such as Cabo San Lucas, had (very patchy) Internet service, but there were so very few websites that when, apropos of my book, I posted a "Baja" page with links, it popped right up near the top of the search engines. Nowadays... ha! My little Baja page is buried on the other side of Planet Jupiter in another galaxy. (I don't even bother to link to it. But here are some podcasts.)

Plus, anyone, including your neighbor's uncle's monkey, can post on Tripadvisor.com, amazon.com, wikipedia, twitter...  It's totally, ayyy, here comes everybody.

So now when I'm traveling through far West Texas for this latest book project-- as yet untitled-- most of the places I want to see and people I want to talk to have some (or a huge) on-line presence. To just to give you an idea, I'm thinking that, for my next foray, I might:

---> take the rock art tour at Hueco Tanks State Park
---> interview Big Bend Sentinel columnist and historian Lonn Taylor, whose book, Texas, My Texas, I am reading right now
-->get more of that unholy (both literally and figuratively) Swiss chocolate at Squeeze Marfa
--> go stargazing
--> hike to an Apache hideout in the Big Bend with wilderness guide Charles Angell
--> interview Simone Swan, who has a rather astonishing adobe Hassan Fathy-inspired house

Need I mention that almost all the relevant websites have a "contact" page. Click and ye shall communicate.

Far West Texas is a bodaciously big area but, people-wise, pretty small. So who's this C.M. Mayo person? What's she writing about us? As I write and travel, I feel exposed in a way that was impossible to imagine only a decade ago. So I realized when I started this new book that I'd need to approach it in a fundamentally different way. I decided to embrace the Internet and social media, to be as forthright and as visible as reasonably possible (but no worries, I won't show you what I zapped in the blender last Tuesday). Yes, the book itself is under construction and that work, as ever, is a good old-fashioned, I mean solitary Orphic Journey. But the fact that I'm writing it and what, in a general sense, I'm after, information about what I've previously published-- all of this is public with a side project I've dubbed

Towards that end, I made that webpage, frequently mention it in this blog, opened YouTube and vimeo accounts, started a twitter feed, got an iTunes RSS feed going, and. . . drumroll . . .  joined the Marfa, Texas, Chamber of Commerce.

Well, porquoi pas? They are happy to have new members, the price is right, and they are -- bless 'em-- announcing my monthly podcasts in their weekly newsletter.


Here's the latest:
--->Click here for the direct link to the podcast. 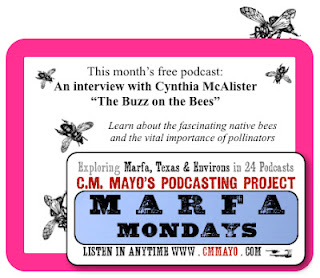 (What would John Steinbeck say? Not sure I'd want to know. Oh. Eh, I think he's laughing. In a good way.)

P.S. Check out this article on Marfa by Ramón Rentería in the El Paso Times: "Metamorphosis in Marfa: Newcomers Offer Infusions of Arts, Enthusiasms." (It sounds like the very doppelgänger of chapter 2 of Miraculous Air, about the town of Todos Santos.)