The Lady in Gold: The Extraordinary Tale of Gustav Klimt's Masterpiece, Portrait of Adele Bloch-Bauer, by Anne-Marie O'Connor 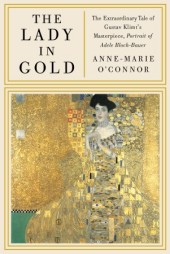 The other day I participated on a panel -- this is the traditional Mexican format for such things-- presenting Anne Marie O'Connor's wonder of a new book, The Lady in Gold, at Mexico City's Palacio de Bellas Artes. Fellow panelists were Irene Hemer, Alberto Hijar and Luz Maria Sanchez, and serving as moderator, my favorite biographer, Michael K. Schuessler. In the audience: (wow!) Elena Poniatowska.

Here's the English version of what I said in Spanish:


I don’t remember the first time I saw Gustav Klimt’s portrait of Adele Bloch-Bauer. Probably, I was in highschool in California, probably I saw it in a book or as a postcard. It would have been titled, as the Austrians had retitled it during the Nazi period, Lady in Gold, with no further ado about its subject.

Of course I remembered the painting. Who could forget the Austrian Mona Lisa, stunning as a Byzantine icon, and that face – the face of belle époque Vienna—so elegantly intelligent, poised above a river of eyes of Horus?

My generation was born into a world where the adults had lived through World War II.  In 1941, my father was a little boy in the suburbs outside New York City and, as he told me many times, he was with my grandmother, as she was hanging up the laundry to dry, when the radio blared out the news of Pearl Harbor.

Veterans, survivors of POW camps, survivors of the Holocaust—these might be family, neighbors, a teacher, the owner of the shop on the corner. They were scattered everywhere, though these terrible times, the terrible things, were not subjects for everyday conversation. I never dared to ask my godfather, who was strangely calm, what he witnessed as a medic with General Patton in the Battle of the Bulge. I did not know until she was very elderly and had suffered a stroke, and I could no longer ask her about it, that my highschool French and German teacher, who had loved to sing "La Vie en Rose" on her guitar, had served as one of Herman Goering’s translators during the Nuremburg Trials.

For those of you young enough to not know, Hermann Goering was commander-in-chief of the Luftwaffe, the Third Reich’s Air Force, and Hitler’s designated successor. Condemned to death by hanging for his war crimes, in 1946, he committed suicide in his cell by taking cyanide.

So, though I was born 16 years after its end, as it has been for many of my generation in many countries, World War II was always very close, very vivid. But now that so many of its eyewitnesses have passed away, the vividness is moving from living memories to containers of memories, that is, to books.

Books: the capsules that carry the information, the stories of what it means to be human, across time and space.

The literature on World War II, already almost unimaginably vast, continues to grow. Just to give you an inkling, my father, Roger Mansell, after retiring, dedicated some 20 years to amassing a library and data base on the POWs of the Japanese in the Pacific. Many of these horrific stories of torture and slave labor for Japanese corporations had been suppressed by the U.S. government and by the 90s, the Cold War over, many of the by then elderly survivors were avid to talk. The collection of books and documents and interviews took over his office, and then the house and the garage and I am quite sure my mother breathed a sigh of relief when Stanford University’s Hoover Institution accepted the donation of his archive. Since my father passed away in 2010, uncountable numbers of books have been published on the war in the Pacific, and his own, titled Captured: The Forgotten Men of Guam, will be published this fall by Naval Institute Press. The POWs of the Japanese in the Pacific was but one subspecialty: World War II touched almost every corner of the planet, including, of course, Mexico. And not to go on about my father’s very interesting and important research. Where I’m going with this is to say that in the ever-flowing Amazon-sized River of literature about World War II, its many theaters of action and its many genres and topics, Anne-Marie O’Connor’s The Lady in Gold, about the creation, theft, fight for, and return of an Austrian masterpiece, has a very special place.

Not only does The Lady in Gold read like the best of novels, with polished prose and a well-structured narrative—richly delicious—  oh! I cannot resist the comparison—as a Viennese pastry— but it’s author, a seasoned journalist, dedicated many years to original and exhaustive research. Having spent some seven years researching my own book, The Last Prince of the Mexican Empire or, El último príncipe del Imperio Mexicano, a novel based on the true story of Maximilian von Habsburg’s court, I know the tedium—and the joys—of fingering through archives, and mulling, sometimes over weeks, months and even years, puzzles, questions that themselves sometimes take eons to even formulate.

Know that when you hold Anne-Marie O’Connor’s book is your hand, you are holding a treasure. A treasure about a treasure.

It might seem curious that we are here today in Mexico speaking in Spanish about a book written in English about an Austrian work of art. And yet, as every Mexican schoolchild knows, Mexico’s history intertwines with Austria’s. The French Intervention,  which installed the Austrian Archduke, Maximilian von Habsburg, as Emperor of Mexico, is the the elephant that lumbered through the middle of Mexico’s 19th century.

Gustav Klimt was born in 1862—the year the French were still battling for Puebla and Maximilian, in his castle in Trieste, recently removed from his position as commander of Austria’s navy—  and only 5 years from his death in Mexico— looked out over the gray Adriatic and mulled over his mysterious future.

The Vienna of Klimt, of Adele Bloch-Bauer and her family, the cosmopolitan, highly cultured Vienna that would be a shadow of itself after World War I: This would have been the Vienna of Maximilian, had he lived.

Maximilian was born in 1832 in Schonbrunn Palace, Vienna—next to the Café Tivoli, where, but a few decades later, Gustav Klimt would take his daily breakfast before heading off to paint in his studio. Maximilian would have been 30 years old when Gustav Klimt appeared in this world, into his Vienna. Habsburg Vienna. Let us keep this simple fact in the forefront:

It was Maximilian’s older brother, Franz Joseph, who ruled the empire from 1848 until his death as a very old man on the eve of World War I

O’Connor evokes the old Vienna in so many ways… For example, her description of Adele Bauer-Bloch’s heir, the elderly Maria Altmann, as she appeared on television only a few years ago:
p. 236

“She spoke the poetic, Italian German of the Habsburg empire, with flourishes, courtesies, and the instinctive impulse—even in open conflict—to be charming. It was like a magic spell, this lilting, delicate dialect, and it was all but extinct now.”

Maximilian loved art and music, he spoke many languages, traveled afar—Egypt, Portugal, and to his Habsburg cousin's empire, Brazil. He relied on an entourage almost as eclectic as the Habsburg empire itself, and famously, his last doctor, Samuel Basch, and one of his closest advisors, Baron Stefan von Herzfeld, were Jewish.

Had he lived, I think Maximilian would been charmed by – and perhaps even championed Klimt’s work, and, at the age of 76, brilliantly white-bearded and perhaps leaning a little on his cane, gazed upon The Portrait of Adele Bauer-Bloch, as I do, with genuine wonder, genuine admiration.

My one and only criticism of Anne Marie O’Connor’s The Lady in Gold, which is really more an expression of admiration and enthusiasm, is that it is not already available in Spanish.